The first part of the walk to Windy Moor is so familiar to us all, but never loses its attraction though. Once the middle of the moor crossing was reached we left the track and walked to the waterholes, which had ample water in them, and then located the main drainage creek of the area.  There was a little concern that it might be starting to dry up, which would make the planned camping there for the track workers due to start building a boardwalk there in February a bit dicey, however the creek had quite a good flow. 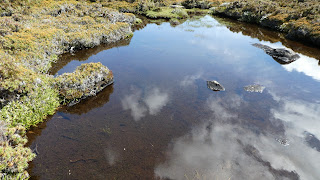 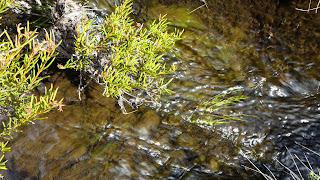 It was so nice there that a morning drink break was taken, before heading down Windy Moor to Davis River. Mostly the ground was reasonable to walk on and it is scenic with well-spaced Richea and other bushes together with the surrounding wooded ridges and hills. 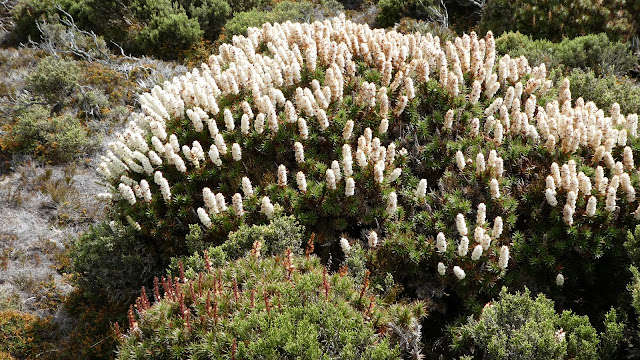 Mount Crooke lies beyond the valley of the Davis and that is where dense patches of Richea and a host of other bushes grow thickly and make walking quite a bit tougher. Very few people visit, and it is not a spectacular peak, but it is a pleasant and the views to Lakes Seal and Webster are unique with the Rodway Range, Mount Bridges and Tarn Shelf as the backdrop. The immediate surrounds of Crooke comprise snow gums and a high country plateau devoid of fearsome scrub.

The return route taken was more westerly and by luck the scrub was not as bad. We even came upon a hollow comprising a host of Pandani (Richea pandanifolia) surrounded by pineapple grass.
On reaching the Davis River again the shorter route via Lake Fenton was chosen which had the advantage of lessening the distance to travel to 2.6k from an otherwise 3.6k.

Mt Crooke is named after William Crooke, who was instrumental and a driving force to have Mt Field declared a nation park.  He was often referred to as the father of Tasmanian conservation and   in 1906 promoted the concept of land reservation for the Mount Wellington and Queen's Domain parks, Hobart, and of wildlife reserves including bird sanctuaries. Crooke was a keen fisherman and was a regular visitor to Lake Nicholls.