Showing posts from August, 2014
Show all

Wednesday 27 August 2014
What good fortune we had with a superb sunny and calm late winter day.
About 70 minutes after setting off we were seated for morning tea at the base of the climbing ridge to Schnells before starting on the unrelenting ascent. After 45 minutes of this I was quite looking forward to a breather and Alan mentioned that the spot ahead, with a view over the small tarn, would be a good spot. However when the assumed point was reached we realised there was another level to go and a stop now was preferred. The tarn lookout was a further 15 minutes on and gave a good excuse for another spell.

Peak on the high plateau The first high plateau was reached soon after and at last some views of Smiths Tarn. From here we also appreciated the surrounding mountain ranges with really good views to the Anne Range with Lake Judd at the foot. Further afield were stunning views over Lake Pedder to the Frankland and other ranges whilst to the south the Western and Eastern Arthurs ranges…
Post a Comment
Read more 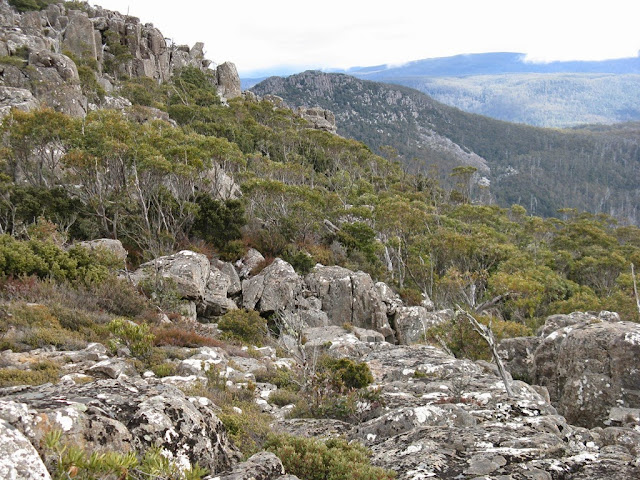 Tuesday 19 August 2014
It is always a puff climbing up the Myrtle Forest track and it was good to arrive at the firetrail to see nice blue sky above Mount Marian. However a mere five minutes later it was grey and even a light scud could be seen there.
Nevertheless the day remained fine directly above us all day, relatively bright and with patches of sun.

Mount Charles from the Marian plateau
A call into the Pineapple Grass field under Trestle for morning tea was made. After lunching on the summit we did a sweep of the plateau west of the summit, where amazingly an exotic pine was discovered. Fortunately Greg had a small handsaw and it was enough to cut the small tree down. 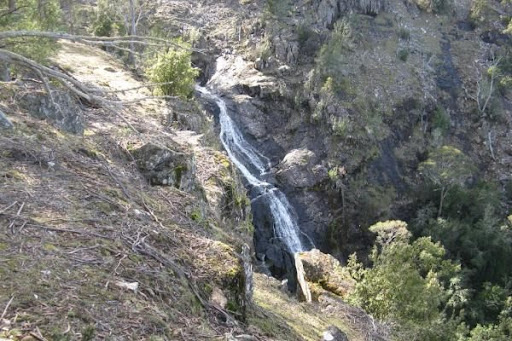 Thursday 7 August 2014
The final plateau leading to the waterfall was very pleasant open eucalypt with spacious low grassland.  The big v shaped valley below the falls was scenic as was the view of Table Mountain, which seemed quite close beyond the trees.   At the start of the walk the breeze was quite chilly but once we had a bit of tree and hill protection conditions became most pleasant, especially when in the sun.
The falls had a reasonable sloping drop of 40 metres and a good flow of water was going over.  The views were particularly good from the sheltered western side which had a number of edges in convenient viewing locations.
The walk started on a logging road then an old vehicle track and eventually through a section of fairly untouched open woodland.  It took almost 1:15 to get there and much the same to return. Although the return distance was 9k the wandering about the falls area added well over another kilometre.