21-23 August 2011
After such a lot of wet easterlies, Freycinet had at last several days of fine weather, which made delaying the walk for a couple of weeks well worthwhile. With so much rain in the area over winter we didn't even bother to see if the preferred route beside the lagoons between Hazards and Wineglass was doable. Instead the conventional slog along the beach was used, then came the pleasure of the bush track from the end of Hazards Beach through masses of flowering plants, especially the Thryptomene which was very thick and spectacular.
Given the time it takes to get to the campsite on the spine we had to keep moving and still ended up cooking in the dim of evening. This was the first time trying out our new light weight tent and, as reported by others, one has to erect it with the crossover of the poles given attention; not as simple as some tents. It is a Macpac Macrolight, a bit like a bigger version of the Microlight, and proved to be suitable for a walk to this type of location. 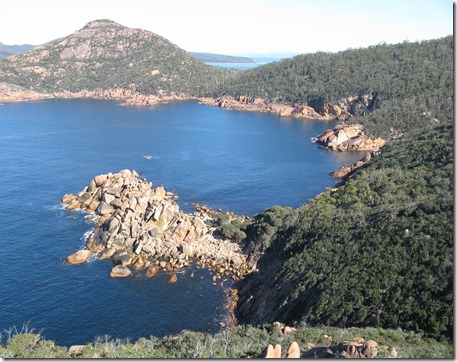 Slaughterhouse Bay from The Hump
On the middle day we headed out to the objective of the walk, The Hump, and arrived without any hassles, helped along by the GPS. Lunch out in the open overlooking Slaughterhouse Bay was decidedly warm as it can often be on the peninsula even at this time of year. On heading back we discovered that others sometimes visit here, when a pair of spectacles was spotted lying on the ground; someone would have been cursing when they realised they were missing. An attempt to see if there was a better way back to camp confirmed the outward route was the best, and what proved to be a detour added 30 minutes of swamp avoidance to the return walk. Still we arrived with more than enough sunlight left to enjoy a pleasant early tea.
The final day was again still, sunny and balmy with the flowers no less delightful. By the time we reached the junction with the Isthmus track we were not keen on more beach walking, so opted for the final leg on the track. A brief diversion left us in no doubt that circumnavigating the very full lagoons would have been slow, wet and arduous . In fact throughout the park every creek was flowing vigorously, something that we had not seen for many long years. 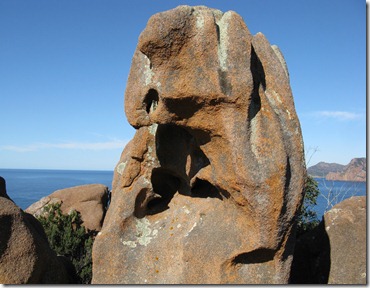 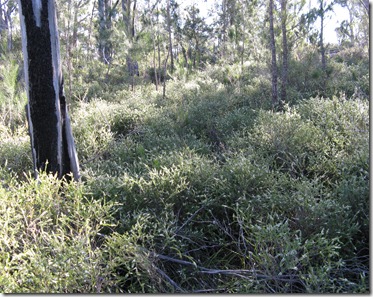 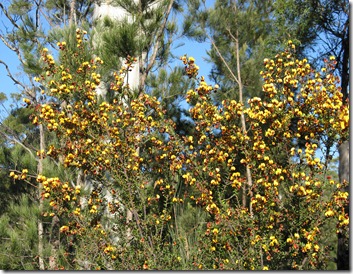