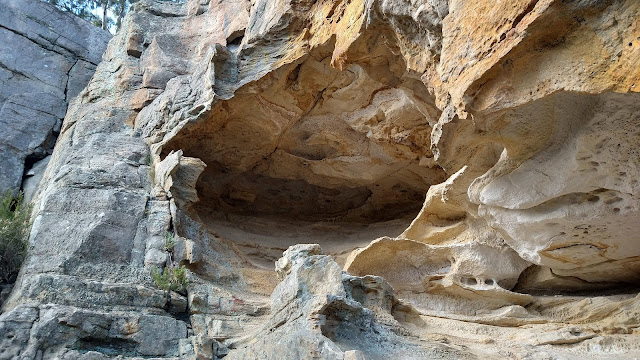 Tuesday 17 August 2021 A walk was planned to go to the ice houses on the mountain, but I should have taken a bit more notice of the weather forecast for the prior days, which predicted snow. The venue was changed to Caves Hill, also known as Rocky Tom, and on to Flagstaff Hill. The snow did eventuate and we got several views of it on our walk, which was in delightfully sunny conditions.   From Geilston Gully  the 11.3 circuit took 4:40 including lunch. Caves Hill/Rocky Tom Wellington Range from Flagstaff Hill Cliff at Caves Hill There is a photo album here.
Post a Comment
Read more 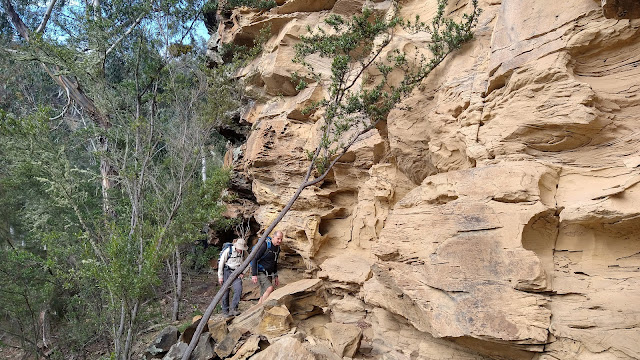 Tuesday 10 August On a walk to Butlers Hill in 2013 we retuned by going under the cliffs at Chauncy Vale.   As it was interesting and enjoyable, I decided it would be good to do a partial repeat by going on a circuit of the cliff section.  It entailed ascending to the top of cliffs at the western end and walking over what is pleasant open country to the eastern end of the main cliffs.  At this point a descent can be made to a shelf running along the mid level back to the western end, passing many caves on the way.  Cliffs at Chauncy Vale After finding a way to the top of the cliffs we were presented with lovely bush dominated by blue green Eucalypts, possibly E tenuiramis.  Once at the eastern end of the cliff line only a short drop took us below the cliff and from then on it was a most delightful slow walk along a good ledge.  There were numerous caves along the cliff line, and even better than I remembered. The normal track to Browns Cave was taken back to the cars, passing two recen
Post a Comment
Read more 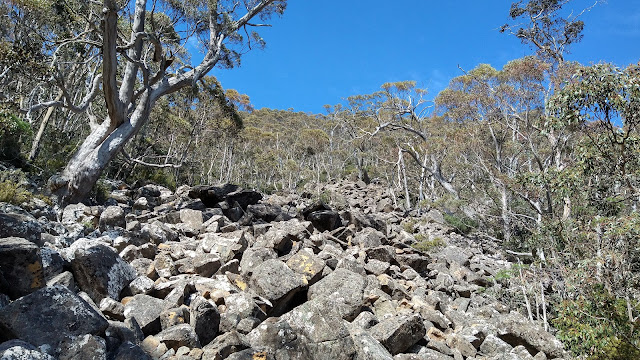 Tuesaday 10 November 2020 Scree above old track I recently walked along the old benched track above The Chalet on kunanyi and noted some cairns that very likely was the route marked by David Hardy about 20 years ago, to near the top of the mountain. There was also a route marked by Snapper Hughes in the region, at the behest of the land managers, for a planned track to the summit to create a circuit walk. This was put to one side because of other priorities, but I have contacted the City of Hobart suggesting it be resurrected. Out of curiosity I went with Greg B to discover if the route could still be followed. Cairn marking route up scree slope   Location of pad which is still visible Mount Arthur and Lost World At the end of the old benched track there were some cairns, most of which seemed old when checked under the top rock. It was hard to know if they had been there for 20 years though. Old cuttings were eventually reached and there was obvious wear on the ground in parts.
Post a Comment
Read more

Off to the Panopticon 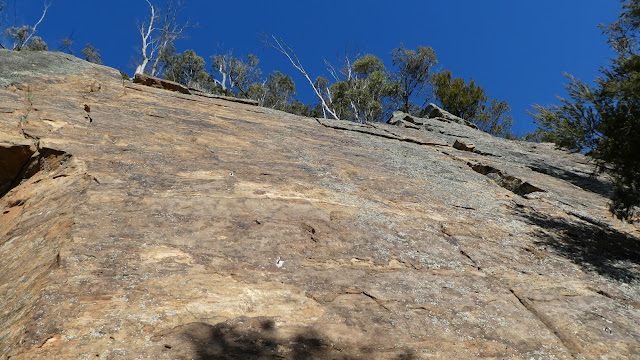 Sand River Cliffs Tuesday 27 July 2021 I looked up what panopticon is and found it is building design that was designed for prisons and allows a single guard to observe all prisoners. I think one of prisons at Port Arthur has that design. Soon after our arrival at the start of vehicle track to the climber’s car park, a car pulled up and entertained us with the attempts to drive up the initial steep hill. Initially we walked the short distance to Barbecue Crag and then headed on to Panopticon Crag. It was here that several climbers were met and added to the interest. After wandering along the base of the cliffs we then went up a gully to the cliff top for lunch. The weather was favourable, with mostly sunny conditions prevailing.    Panopticon cliffs Boronia anemonifolia (Stinking Boronia) Under the cliffs There is a photo album here    or click image below       Sand River Panopticon 2021 Murray has sent through this link to his photos.
Post a Comment
Read more 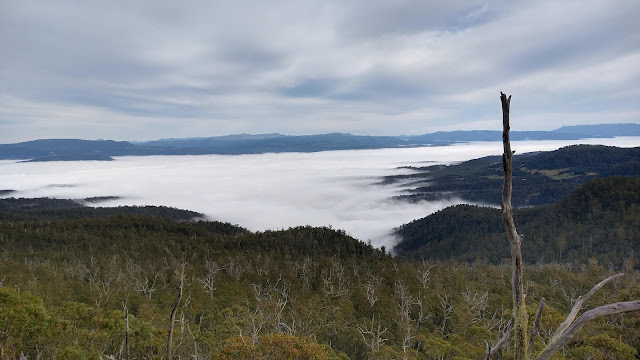 Tuesday 22 June 2021 A bushwalk that climbs to a plateau area that was selectively logged many years ago but is now not unpleasant country. It finishes in a steady and moderately steep climb to the summit. As noted on the previous visit in 2016 some sections had plenty of vegetation growing in the track, but nothing too overgrown to require much pushing through. Prior to the day, I had heard that access was now more difficult as a house is going to be built that would block the way. It was understood the owner was friendly enough and was agreeable to a reroute being put in. However, access was still possible at this stage. What will happen is uncertain and it may well be that a different way in will be needed in the near future. We decided to take the slightly longer but drier route in, but went on the alternative for the return leg. Although there was plenty of water about on the lower track, it was easy enough to avoid getting wet feet. The ascent on the bush track to Moun
Post a Comment
Read more
More posts