Wednesday 21 July 2010
How my memory of this as a relatively flat walk is amazing, because it was anything but.   We started off with an attempt at taking the direct route over the farmland, but the Tea Tree Rivulet was full of water and rather than risk wet feet we opted for the extra 600 metres by circling round on the vehicle track.  Once into the bush we discovered the route went steeply uphill  by  250 metres.  It was a fairly gentle down from there until we reached the point for descending to Griffiths Rivulet, where we found it quite steep with plenty of loose soil.  Decent size pools could be seen in the rivulet and mistakenly we assumed these would be above the falls, however after a bit of downstream scrambling we soon realised that Hidden Falls was back upstream.

Although it had been delightfully sunny thus far, it was different in the shade at the falls and we were pleased to get back into it for the return journey.  On reaching a junction  a wrong turn was taken and even the local dog from the farm, that had joined us for the trip, didn't warn us.  Nevertheless it made little difference as the GPS brought us back to the top of the hill where the track was again picked up.  A welcome coffee was had at Buckland.
Click on the image for a larger view of the route we took 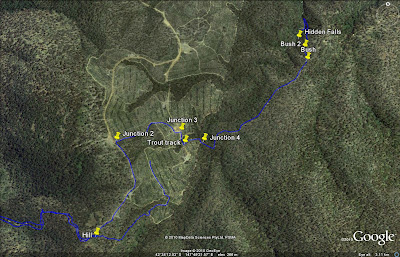