16-23 November 1996
Problems with the minibus meant we had to make last minute arrangements for Sue and Sandra  to drive us to Scotts Peak.  Pat’s son Neville took us over by boat to the foot of Mt.Giblin.
Showers were falling around the mountains so it wasn’t a very auspicious start.  I was the last to start walking and just followed up where Alan had disappeared in a band of scrub.  I thought voices were coming from somewhere well to my right and when we emerged into the open the first boat load was still below us on a different ridge; they had managed to strike thick scrub and a gully.
Conditions improved and once on the crest of the mountain we only had one or two brief snow storms blowing into us.  The two peaks of Giblin were visited.  One short but scrubby climb through a dip caused Dave T  some anguish as a twig poked him in the eye.  He had some discomfort from its effect for the next few days and Robyn washed his eye with salty water each day until it was sufficiently improved.
Camp was made near Jones Pass where we had to scout about in thick scrub for water.  Next morning was mild as the remainder of the Giblin ridge was traversed to a low point overlooking the Frankland River.  On the last section Pat, Dave T and myself opted to skirt a wooded knoll whilst the others went through.  Our route proved easy enough, but the rest came upon a barrier of bauera and were forced to drop to the valley floor early.  As a consequence we did not meet up again until lunch time beside the river. The remainder of the day was spent reaching Richardson Creek with many swampy flats to be crossed. 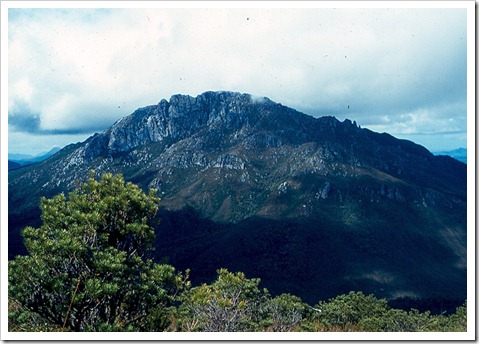 Greystone Bluff from Little Cinder Hill Nov 1996
Dave T persuaded us to start at 7am and it was as well we did, for the scrub protecting Cinder Hill made it a long hard day before a suitable camp site was reached.  From the descent off Little Cinder Hill until the very top of cinder Hill the scrub was unrelenting and we took 5 minute turns leading.  The section took 5 1/2 hours and covered a mere 1.5 kilometres.  Water was very scarce and a few snow remnants near the summit were the only source for the day; other than that carried.  A camping site was spotted down the south west ridge and at 5:50 we trudged towards it (arriving at 7:15), but I would have preferred to have just been able to rest. 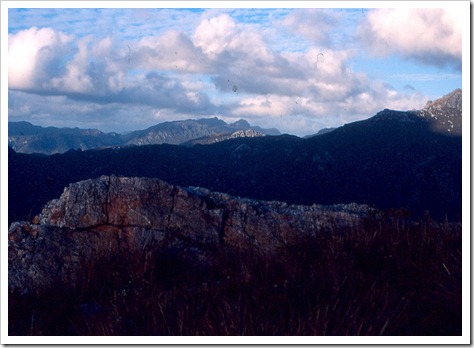 Mount Giblin from Greystone Bluff
Water remained a scarce commodity until Pine Creek was reached for lunch the next day.  Mostly the descent was fairly reasonable except for a short bit of very thick and high bauera.  Drizzle commenced during lunch and became rain as we made our way up the clear ridge to a small perched plateau part way up Greystone Bluff.  The rain ceased before we even set up tents and sun found its way through. 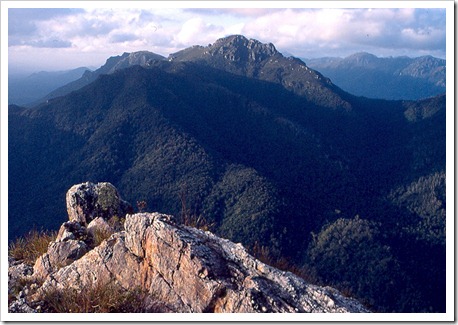 Cinder Hill in late afternoon.
By mid morning we were under the cliffs of the quartzite summit block and looking onto a delightful flat bowl, just beckoning as a tent site.  Whilst making for the high point of the mountain the clouds parted and conditions remained fine until mid afternoon when snow showers commenced.  During the afternoon I wondered around the maze like walls of quartzite that formed the perimeter of this exquisite area perched high in the wilderness. 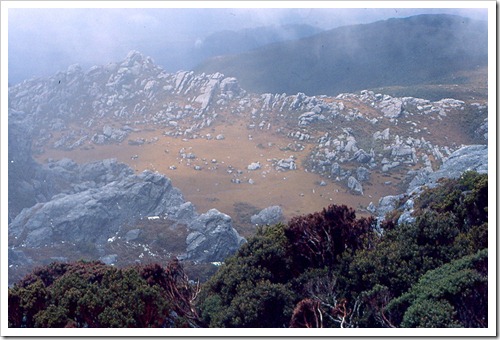 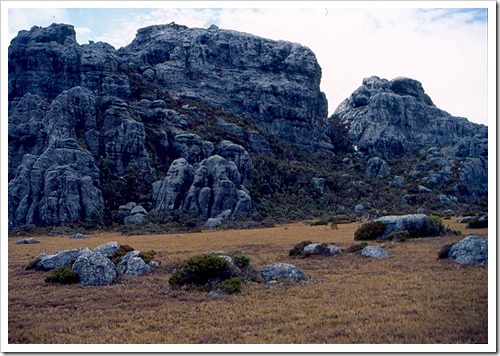 Campsite bowl on Greystone Bluff
Snow continued falling during the night, which was punctuated by a period of thunder and lightning, including one stupendous flash that I could see so very clearly even though my eyes were shut.  Morning revealed a vista of white and we were thankful for Chris and his navigation to get us off and down the ridges to Badger Creek depression with all it’s Huon pines.  Just as we finished putting up the tents heavy rain began to fall. 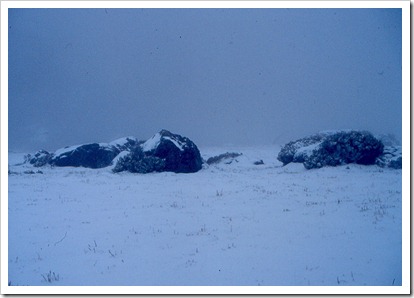 Snow at campsite in the morning. 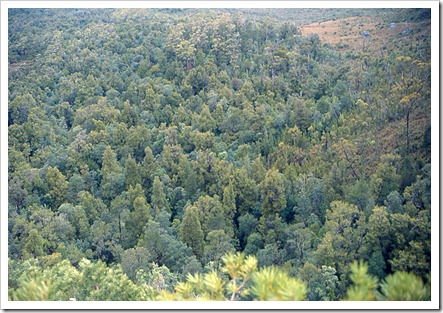 Huon Pines in Badger Creek depression.
Fortunately the rain ceased during the night, although its affect was noticeable from the impressive waterfall dropping off Greystone Bluff.  We worked our way down to the Davey River valley and onto a long distinct hill where views of the Crossing River were obtained.  Thick scrub was encountered for a period after leaving the hill, whilst heading north to a campsite overlooking the Crossing Plains. 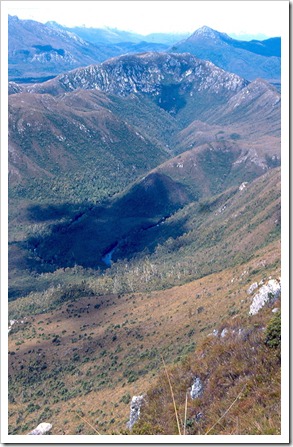 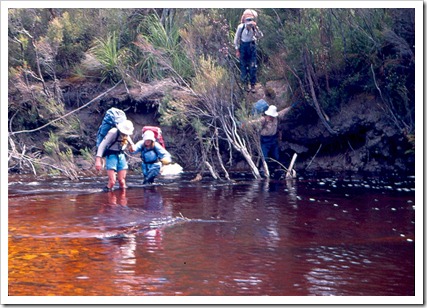