Showing posts from November, 2007
Show all

An Attempt on Mt Jukes 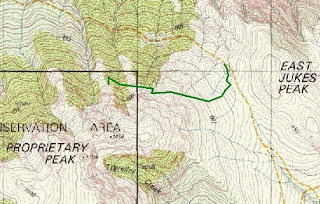 Wednesday 14 November 2007
We located an old bulldozer track uphill from the lookout and eventually came onto a cut track with plastic markers and occasional wooden posts. The track contoured the slope crossing small gullies, but at 828309 it ceased and we could not locate an extension anywhere.
We both wondered why the cut track should be heading in the direction it did as we thought it more logical to ascend more directly to Proprietary Peak. Although conditional were quite cloudy when we started by the time we reached the end of the cut track it was quite drizzly and visibility poor with the peaks now completely blanketed, so we decided it best to retreat and return when conditions were better