Most of the walk was on fire trails, until turning off for the section up and over Mount Hull. It was debated whether we ascend Hull from the northern side and descend to the saddle on the southern end.  The only advantage to that way would be if it was decided to continue the prominent knoll further south, involving an addition 500 metres of walking each way.

The decision was to tackle Hull from the south and that may have given us the advantage of seeing what is known as Leamans Knob. By going the reverse could easily have meant that it was bypassed without being noticed.

The route up that we took had several cairns and sometimes tape and was reasonable walking terrain. The summit plateau has several flat rocky areas that make attractive gaps in the bush, one of which we had lunch on.  Unfortunately, one of these also had a lot of healthy Erica, most of which got pulled out, but a few big ones remain.

We walked a bit over 1k looking for the rock tor, known as Leamans Knob, without success. Whilst descending by the much rougher northern face we managed to spot our search rock, about 300 metres from the summit.

In all the distance, including the over 1k searching about, was 14.7k and the time taken was 7 ½ hours.

Close up of the GPS track with the search included. 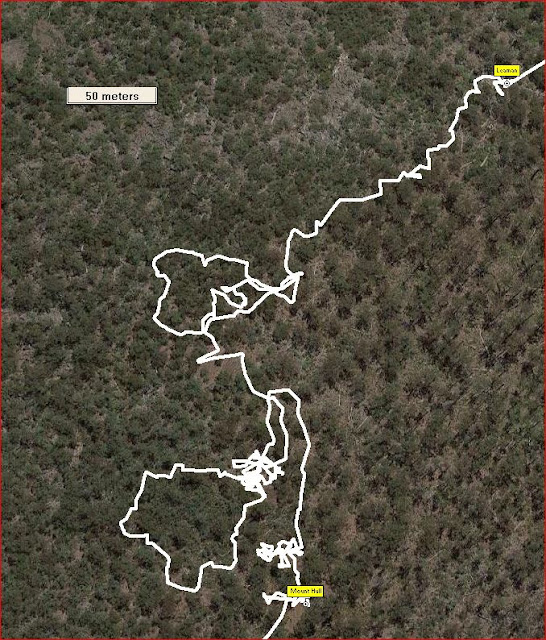