On the last occasion that we walked to a favourite campsite on the ridge above Bryans Lagoon there was little daylight left, so breaking the journey into two days sounded quite appealing. It worked well for us with arrival at Lagunta Creek at the end of Hazards Beach about 3:15 pm.  After checking the small bay some 400 metres south a decision was made to camp there; especially as it was half expected that a school party would turn up at the main camping area.

The walk through to Cooks Beach next morning was a delight with this section of track one of the richest in flowering plants. Masses of Thryptomene were on show as was the yellows of Hibbertia and Aotus.  From Cooks through to the creek at the bottom of the climb to the ridgetop was also splendid with the greatest number of orchids and a section with heaps of waxflower. It is a steady 1.6k uphill from here and took 50 minutes for a height gain of close on 200m. After lunching a route was taken to a campsite with a delightful aspect with great views over Bryans Lagoon and Schouten Island.  A short afternoon walk to the southern swamp which is a bit over 2k return but in this terrain took 75 minutes and this allowed lots of time to cook tea in the sun.
A different route was taken to reach East Freycinet Saddle and the track followed to the junction with Mount Freycinet where after a short distance up this track we headed off to pick up the ridge leading down to Lagunta Creek camping ground. It was a scramble around the steep side for a while until a rough pad was reached.  Several times whilst going down from here we lost the pad, especially when having to evade fallen trees, but each time the nose of the ridge was eventually regained.  It is 4.5k between tracks this way.
By the time the car was reached it had become quite cloudy and a shower could be seen in the far distance to the west; our timing between weather systems had been fortunate.

A photo album is at this link. 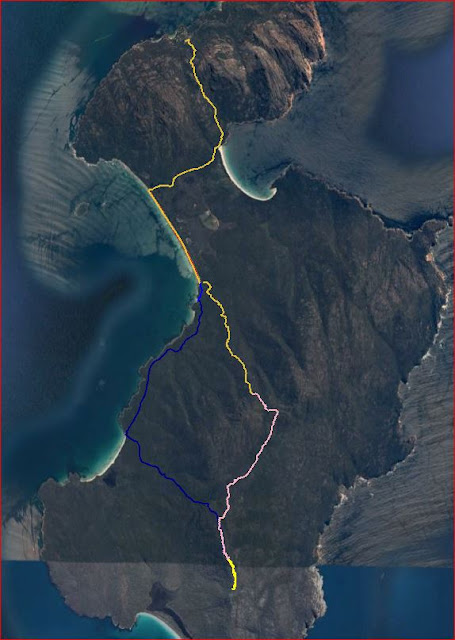