Wednesday 30 March 2016
Long Marsh Dam has quite a history as it was the site where local landowners were going to use convicts as free labour in 1840’s but when it was decreed in 1844 that they had to be paid the landowners refused and the convicts walked off the job and that was the end of the project.
Shirley suggested that Honeysuckle Road be used as the access to Long Marsh and a perusal of the 1:25 maps and satellite images seemed to confirm that way would be possible. From Ross it was about 44k with the last 28 Along the gravelled Honeysuckle Road, which was not too bad although it was a bit rougher towards the end. A bridge that once spanned the Macquarie River has long gone which meant a walk along the road to the access 4wd track. It was most noticeable that the bush along beside it was literally carpeted with Hibbertia procumbens to an extent that I had never seen anywhere like this before,
At a junction Shirley took us to the old quarry sites where large stone had been shaped and abandoned, then on to the Long Marsh itself and the coffer dam still partly in place. Here we could also see the extensive embankments that the workers had toiled to build. From there it was a scramble up more embankments on the western side.
A marked walking track took us to the ruins of the probation station. Quite a number of the remains of buildings are there and it was interesting to wander about the site. Our return eventually brought us to 4wd track above the weir on the river and this point was less than 1k from the car and we opted to risk following it in the opposite direction heading south westerly and hoped it would get us close to the cars. In fact, it went all the way meeting Honeysuckle Road, only a couple of hundred metres from the cars.
A photo album is on line, click the image below. 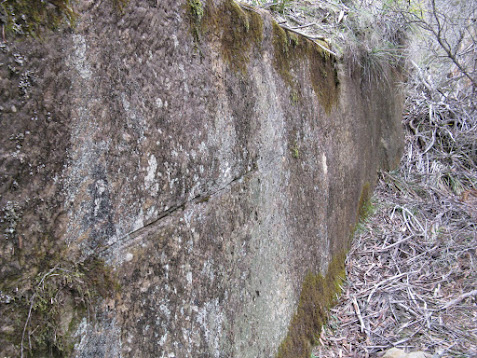 The Map of the route taken 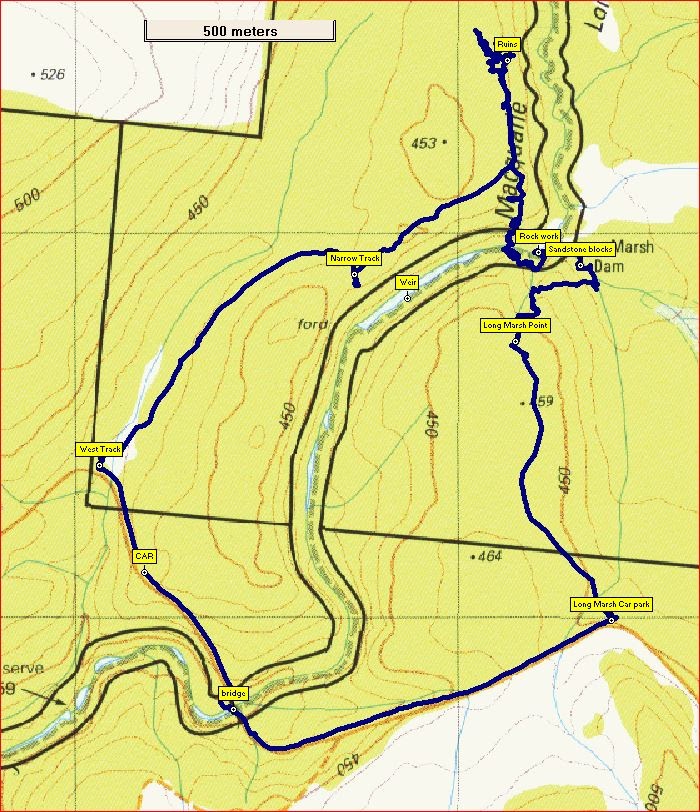 From a Northern Midlands Council report on the site

The Long Marsh Dam and Convict Probation Station is located on the upper Macquarie River, about 13 kilometres south of Lake Leake and north of Tooms Lake. The site is accessible by vehicle and foot via Honeysuckle Road. It is an important historic complex within the rural landscape of Tasmania’s midlands region.
The Long Marsh Dam and Convict Probation Station contains evidence of a range of convict dam building activity, and extensive remains from the associated convict settlement. The combined dam and settlement site is a large complex that covers an extensive area.
The site comprises three main activity areas, evidence of the construction of the dam. Firstly, at the southern most end of the complex is the dam site. Two 20 metre high manmade earthen and rock abutments form the dramatic visual presentation of the dam site. The embankments flank the partially completed rubble coffer dam wall below. Diversion channels under the embankments run parallel to the river.
Secondly, is the sandstone quarry to the southeast of the dam. The sandstone quarry is located east of the embankment and rock abutment. The quarry contains numerous dressed sandstone blocks cut from the quarry face, and the remains of the quarry face has partly cut blocks of sandstone in situ. Dressed sandstone blocks are scattered in the marsh area east of the embankment. Thirdly, a pathway from the dam site gives access to the ruins of the convict settlement, situated in open woodland on a hill overlooking the Long Marsh. The settlement contains numerous features including building foundations, remains of dry stone wall compounds, pathways, outbuildings and several chimney butts. The station area originally consisted of 14 dwellings. Other ruins and features are linked by a network of cleared pathways through the bush. At a distance from the main settlement is the isolated grave of Thomas Collins, a convict worker killed by a falling stone in 1843.
The Tasmanian Heritage Council state that the Long Marsh Quarry and Convict Probation Station is of cultural heritage significance because of its association with the convict probation system specific to Tasmania. Long Marsh Dam demonstrates early attempts at applying civil engineering in the form of large scale irrigation projects aimed at promoting agricultural development in the Midlands. The site also has significance from being one of the largest and ambitious convict based land development projects undertaken in Australia at the time.