This is a trip report written soon after the walk in June 1990.  It may have been published in a magazine, but I am not sure now.

Does camping on a high plateau in strong winds and rain, pushing uphill through thick scrub, crossing a waist deep creek to set up camp at last light or forcing on frozen trousers, socks and boots in the early morning have any appeal to you. Well in spite of these obstacles, I and most of our party enthusiastically enjoyed just such an adventure.
It all took place on a June long weekend when Dave T led Philip, Richard, Sandra, Nigel and I up from Narcissus to Byron Gap in fine windy conditions. Our objectives were a triangle of peaks, Mts Byron, Cuvier and Manfred, situated near Lake St. Clair in the southern section of Tasmania’s famed Cradle Mt. Lake St. Clair National Park. 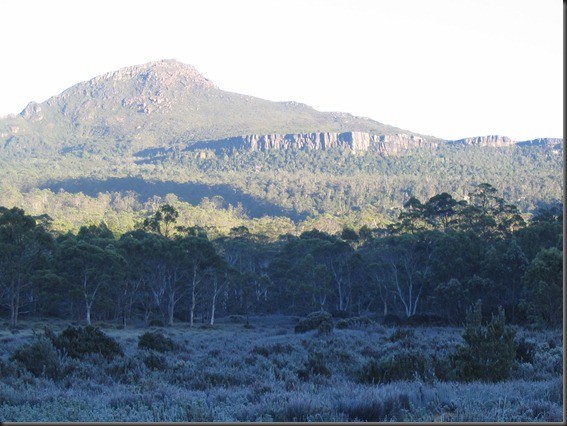 Each of these mountains is capped by dolerite overlying either a conglomerate or sandstone base and although not grouped under the name of a range, do have a direct and distinct link from Mt. Olympus through to Goulds Sugarloaf.
Much of the distance to the Gap is through rainforest which features lovely specimens of Sassafras, however the slopes just under the crown of Mt. Byron seem to be dominated by Richea Pandanifolia with the mossy ground being liberally spread with the long fronds fallen from these unique plants.
On reaching a rock scree, packs were left behind whilst we went to the top of Mt. Byron and then on return the western slopes were negotiated down to a delightful land bridge connecting to Mt. Cuvier. This traverse was now new ground for all of us as we passed numerous small nooks surrounded by dense thickets seemingly designed by nature especially for walkers tents. However it was too early in the day for camping, so their attraction had to be disregarded.
A few light showers met us on reaching a splendid panoramic shelf below the summit of Mt. Cuvier, and along with the arrival of strong winds, encouraged establishing guy lines on setting up tents. The north east wind increased considerably in strength during the night, bringing with it quite heavy rain. Morning, however, saw a complete change with a slight south west breeze gently pushing along the enveloping cloud.
Dave had planned a day walk out to Mt. Manfred, so was up early to discourage anyone from thoughts of drowsing on for a bit longer. Unfortunately, a shock awaited him as his ‘good morning’ call outside one tent was shattered by the news that Nigel’s sleeping bag had become entirely soaked. Several options, as to our best course of action, were discussed, with Richard suggesting that we all go to Narcissus via Mt. Manfred, so that Nigel at least could stay overnight in the hut. By 9:00 am we were moving through the mist, encountering views from time to time of the northern escarpment of Mt. Cuvier. 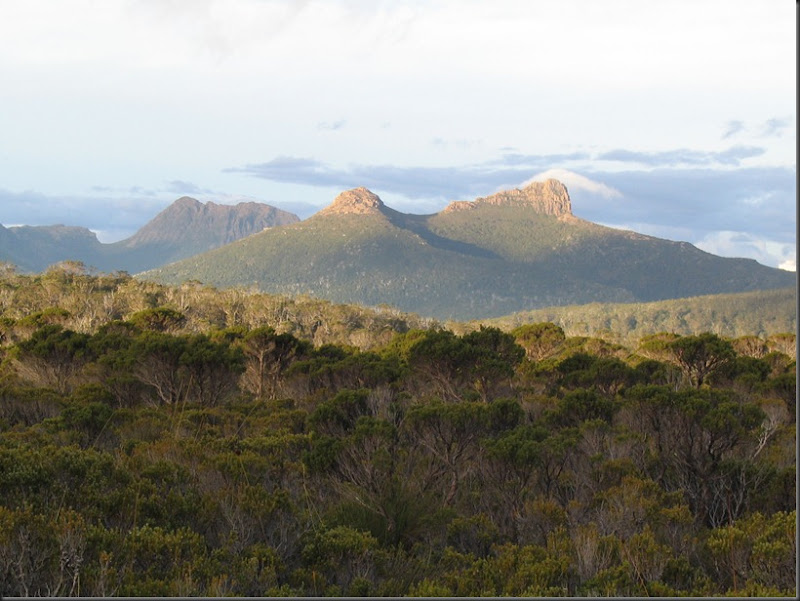