Any drizzle was expected to be gone by the time we started walking and it was, however the thing that was overlooked was the drenched vegetation left behind.   By the time Manuka Flat had been crossed I was thoroughly fed up with the constant dousing from the wet Bauera and other bushes and was pleased when Greg took over in front.

What happened on the next section remains a mystery to me, because somehow, I ended up in front.  Greg B stopped for a drink and I wondered on thinking I was following behind Greg K, but did start to wonder why I couldn’t see any of his boot marks in the mud.  Anyway, I got the plateau, which was in thick mist, but there was no sign of Greg.  I returned to the edge of the plateau and there was Greg just pushing through the thick and wet scrub pressing in on the track; Greg looked thoroughly soaked too.  His first words were “how did you get in front of me.”   A good question, I thought.  It seems that I walked past Greg when he stopped to urinate and neither of us noticed the other.

Neville arrived with the information that Greg B was most likely heading back and given the thick mist on the plateau, it wasn’t a hard decision to follow suit.

We were somewhat comforted by the view from Dover of Adamsons still under thick cloud.

It was not a day that encouraged photographs, so only two taken of large Eucalypts in the forest. 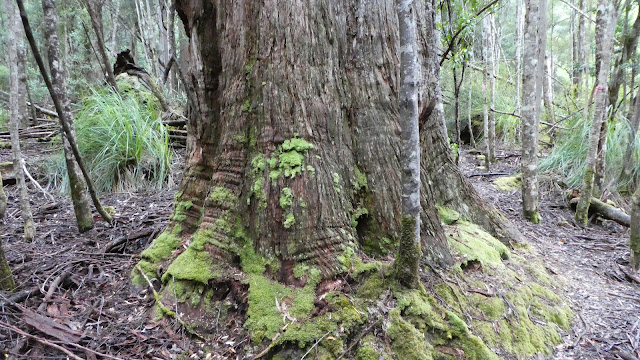 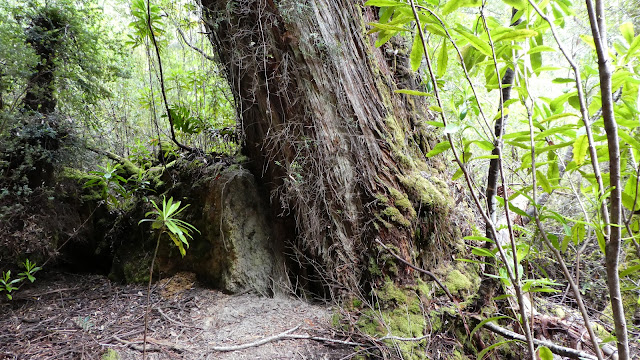