4-6 December 2015
Finally, after several postponements the walk was on with moderately promising weather. Although it takes a bit of effort getting there, the North East Ridge is a superb area and in good weather it is quite sublime. The plan was to get an early start to allow time for rests on the way up and this had us on the track by 7:30 am. 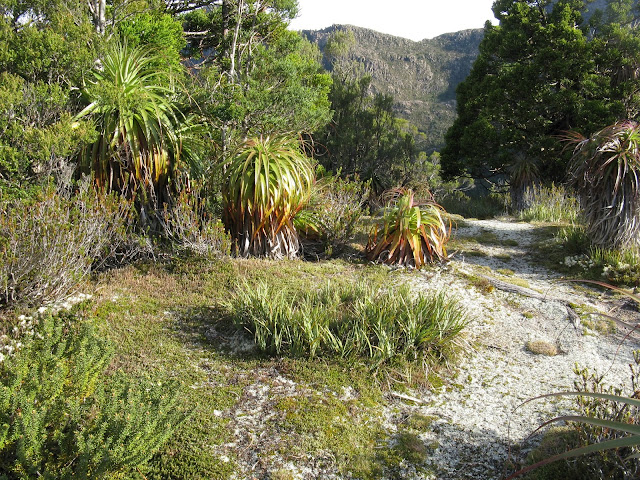 The plain was fairly wet, after recent rains, but not too bad and the bushes didn’t seem any higher or thicker than my memory from the last crossing. My last visit was in late March 2008 in delightful conditions. The details and photos are on the web. It has not been uncommon to have to do a bit of route searching from time to time in the forest and it again was the case today, but with 5 of us it didn’t take all that long to find one of the tapes marking the way.

A break beside the one and only creek, then lunch higher up provided much appreciated rests. By this point the slope is reasonably steep and continued that that way until the ridge top was reached; I hadn’t remembered the bit once beyond the small cliff line in the forest being steep, but it was. 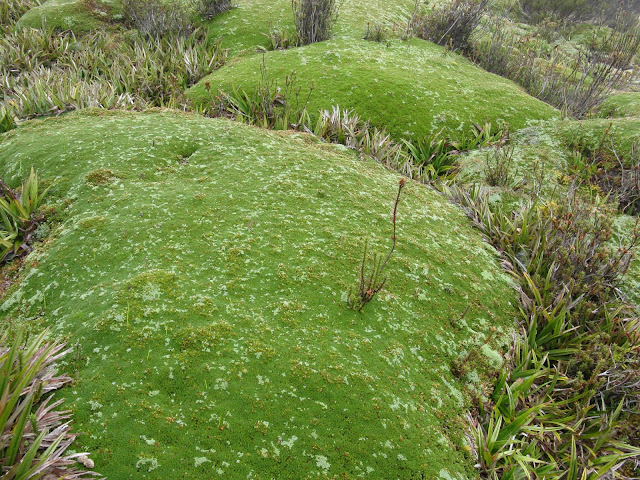 It was a bit cloudy rather than the bright sunlight and clear skies hoped for, but nevertheless pleasant. Then on to camp with plenty of time to relax after the exertion.    The ridge comprises several terraces and one of them has a few huge cushion plants, whilst one tucked away lower has an extensive and striking area of cushions covering much of the ground.  That is where we ventured in the morning, although at first it was very misty and didn’t fully lift all day. Nevertheless, the cushion shelf was really attractive and from there we followed the ridge top up the slope of Mount Anne. Although I had the GPS reading for the way beside a buttress and onto a narrow shelf under the north east face of Anne, I walked well past before discovery the mistake and then when we did get back to the point it looked different to what I thought. However, when Neville said is there a pineapple grass ledge, I knew we were in the right spot. A little bit of hither and thither on ledges, a couple of heave-hos and we were on top. We got a number of decent views although cloud cut vision at times and we departed after lunching just as another party arrived by the conventional route. Once back on the shelf of North East Ridge a drizzle began and it was then I discovered that my parka had been left at the tent; fortunately, it remained light and it was only just after arriving at camp that a heavier shower began. 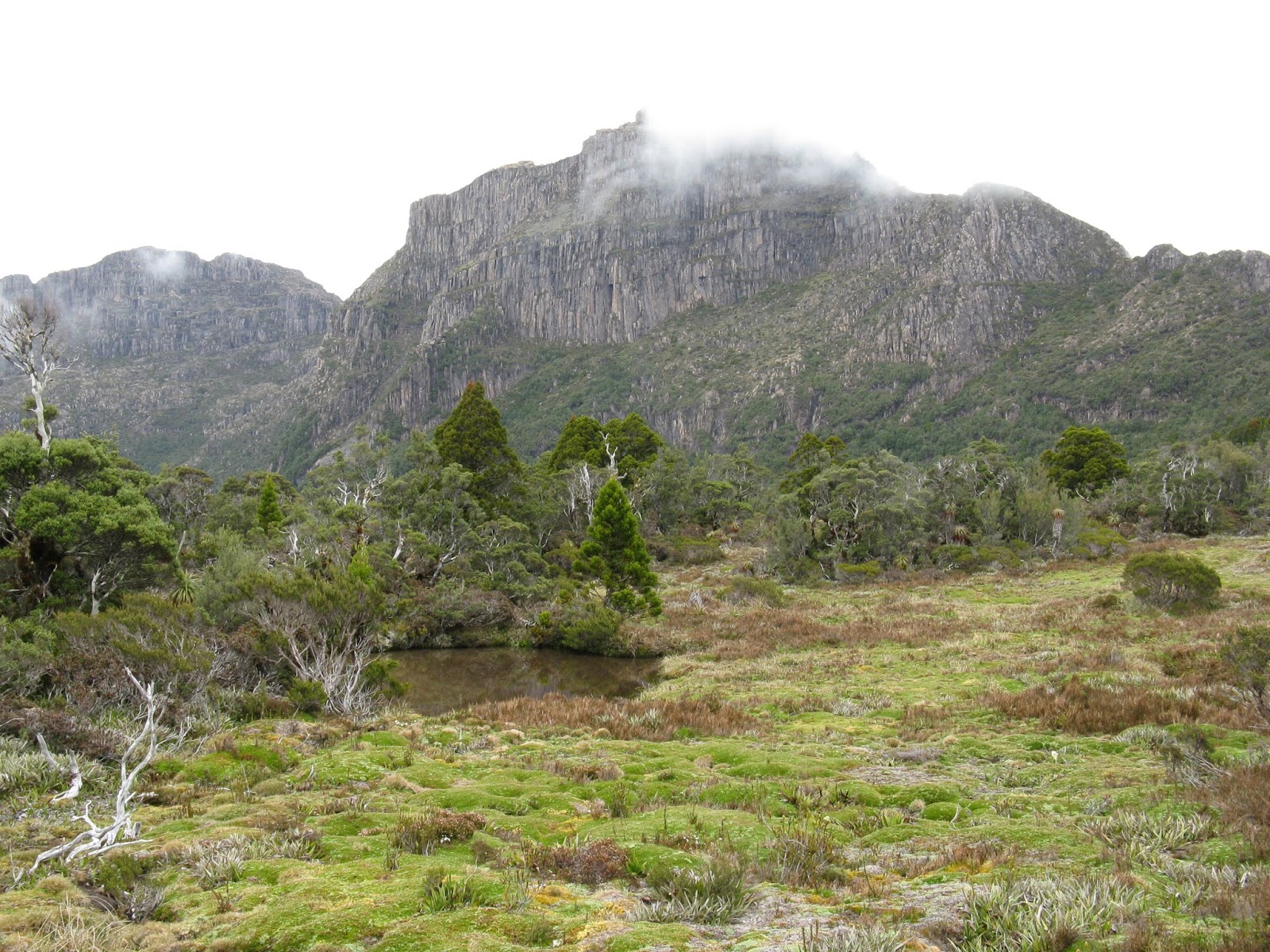 Mount Anne from the cushion shelf 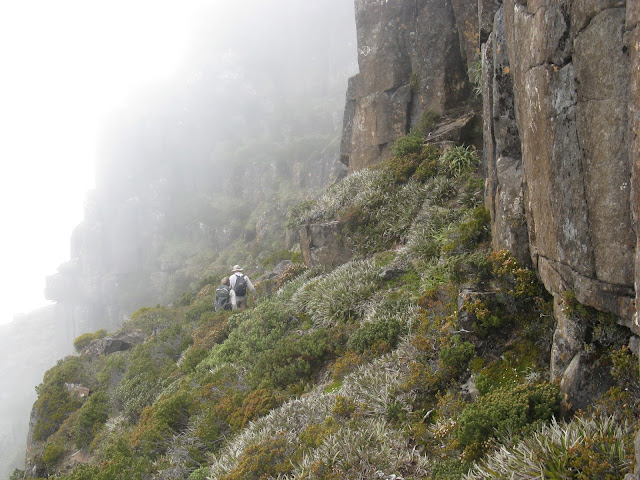 On a shelf on the way up Mount Anne

Morning was again very misty and it was not until well into the descent before we began getting below it. I found my legs felt stiff during the steep downhill section and getting under and over logs became a tedious imposition. As I had knocked my thigh against a log on the way in, it was not unexpected that there would be a bit of tenderness there, but the surprise was the discomfort whenever a log had to be hopped under or any other time the hip belt padding pressed upward against my side. I later discovered a bruise below my ribcage which perhaps was the result of swinging under limbs and making the pack belt press into my side.
By taking advantage of the early start for rest meant the inward walk was over an elapsed time of 8 hours (7:30 - 3:30) whereas the return was 6:20 elapsed time (8:30 - 2:40) 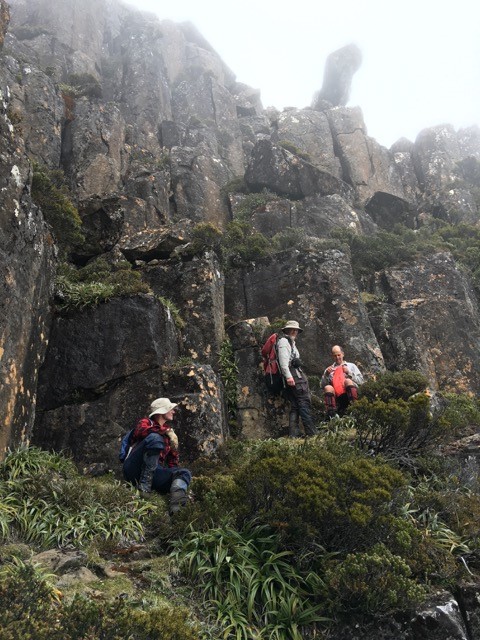 On the ascent of Mount Anne, Greg, Peter and  Graham.   Photo from Neville 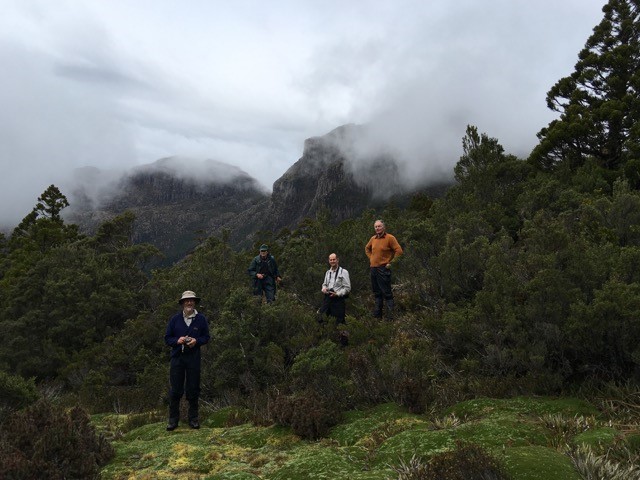 On the cushion shelf, Peter, Alan, Graham and Greg.   Photo from Neville
The photo album can be viewed by clicking the image below.