Wednesday 8 January 2014
My first visit to the range was probably back some 31 years in 1982 (oh dear), on a trip to Nevada Peak, but I still remember arriving at the plateau there and seeing a spectacular south west scene ahead. That walk was via Lake Skinner and had delightful weather, on another occasion I remember sheltering behind the large rock at the lake to avoid the crap being thrown at us.
Some months ago the planned walk to Snowy South had to be cancelled and at any rate the weather was not suitable.  Good conditions prevailed this time and in fact it was fairly ideal because it was at the start of a predicted fine spell which gave quite a cool morning with a fair amount of sun and even by the afternoon it was still pleasant.  There was some high cloud about but not enough to detract from the day.
It was in 2003 that I last went to Snowy South and my memory was driving past clearfell towards the end, but it was mostly trees beside the road this time.  It also seemed further and to have more uphill than what I remembered. We started walking at 8:50 and made good progress with Neville setting a pace that tested my ability to keep up; I think he realised this and slowed his pace to match mine. 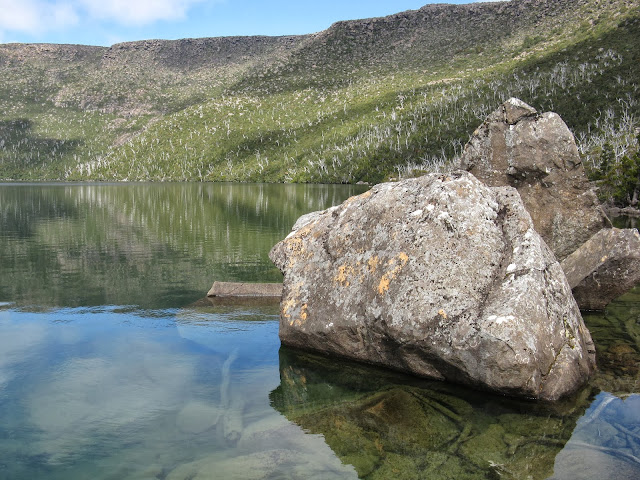 Initially the track is fairly level with several wet and boggy spots, but with enough stepping options to remain out of them. After some 45 minutes a flatter zone was reached then it goes back into rainforest for a somewhat steeper section before arriving at a ridge and drops a little through a shrubby area.  Once the track kept going through this and was quite wet, but a diversion track was put in and it sidles round to join back with the original one a bit before Lake Skinner.  1:25 Skinner
The lake looked really good in the calm conditions and we spent a pleasant 30 minutes or so there.  A bonus was a geocache there and the only negative was a beer can that had been fairly recently thrown away by an uncaring visitor; Neville snared it and carried it out.

After crossing the Falls Rivulet, the outlet creek, there was a not overly steep climb to the plateau.  It does look like a slog when viewed from the lake and it does have a few rock scrambles but is not as hard it appears.  Once on the plateau we took a longer approach route past some small tarns and pools with attractive alpine gardens.  I veered off too soon so we did have a couple of screes to cross to reach the summit.  The top is up some big rocks but with care is not hard to reach.

The views whilst on the summit were good and we did notice what looks like a big landslip near the Four Peaks area of the Eastern Arthur Range; it would be interesting to learn more about this and when it happened.
The conventional direct route was taken to return and it was easier than I had remembered; which is something these days.  Although going up usually is slower than down the time saving by the direct route was 65 minutes to Lake Skinner as against 80 minuted to get from there to the top via the more circuitous route.
The walk inwards, excluding breaks, was just short of 3hours and the return 2:30.  The total distance was just over 12 k with the inward route about 200 metres longer then the direct return route. 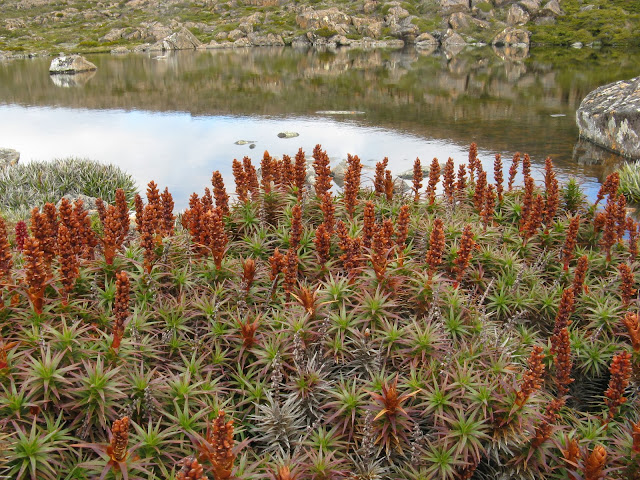 Click on the image below or this link to view the photo album from the walk.