Tuesday 18 August
The prospects for this walk were somewhat unknown and it had been so many years since I had been along the top of the central part of the Meehan Range. This was on a trip John Cannon took which went along the tops from near Brighton and finished at Lindisfarne, and I didn’t really have much recollection of it. Anyway for this walk I got details from Chris who had been there only a few weeks before and it sounded like it might be interesting. I have often noticed the enticing cliffs and overhangs when driving on Grasstree Hill Road. 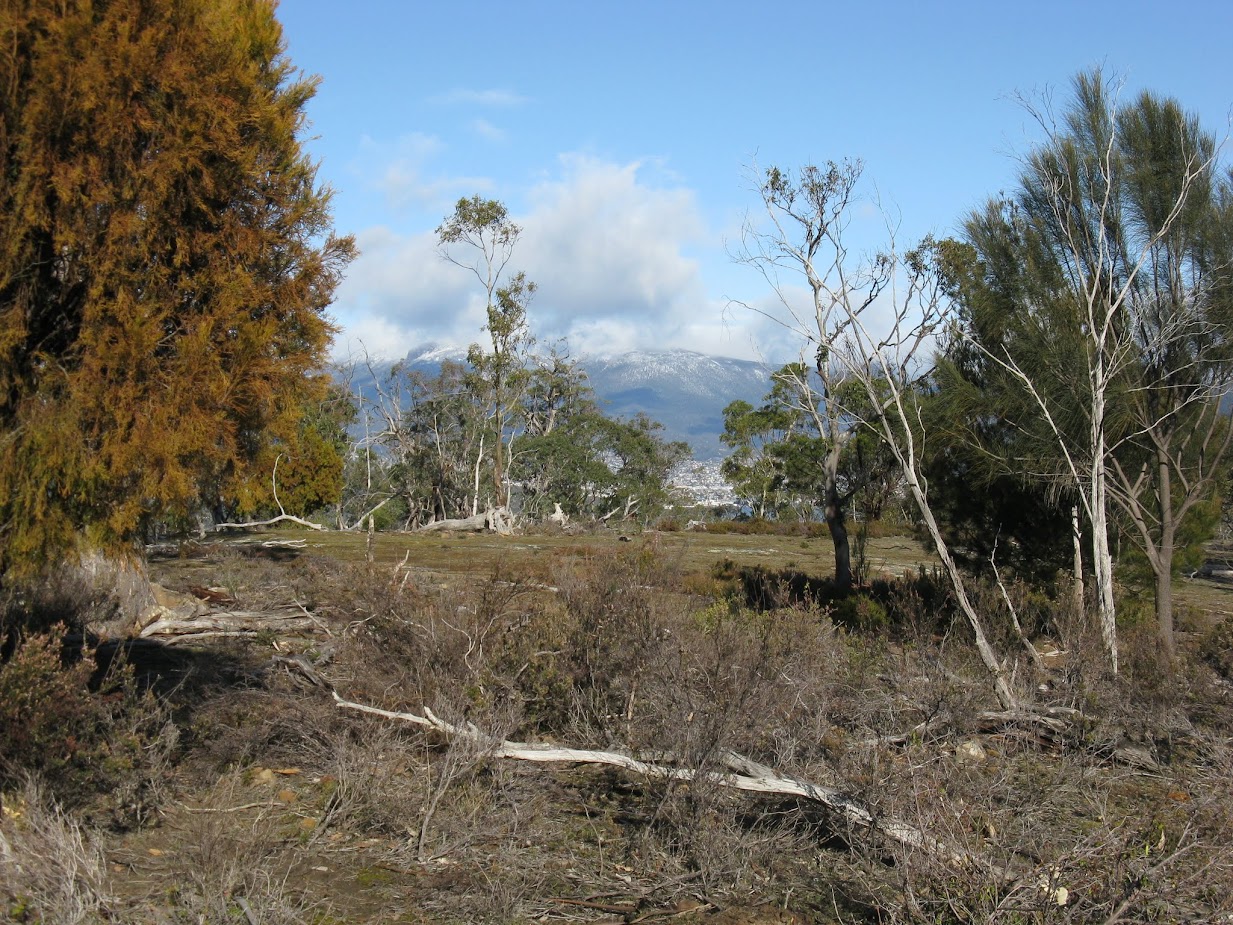 Rock slab area with Mount Wellington
The morning for the walk was still, clear and sunny with a chill still in the air. As we were about the leave from Risdon Vale a car pulled up behind us and what we though was a woman got out and began talking to us, however by this stage we were quite unable to determine if the person was male or female. Afterwards neither Greg, Adrian nor I felt any the wiser.
Initially the walk is on a rough 4wd track that appeared to have been cleaned up and it also had a few ditches dug to try to stop vehicle access, but bikes obviously were managing to bypass them. This continued for about 2k until a private property sign and fence were met and at this point we headed uphill. During the 200m ascent we went through some really nice country with big rock slabs, lookouts and numerous grasstrees. In fact grasstrees were a stunning feature of this section of the Meehan Range. Once on top there are several open areas and sections of easy scrub free through the trees. Morning break was at rocky hillock where we noticed that the eucalypt tree species was now smaller and quite different to those prior. We were now on Basin Hills and open walking and soon came upon a 4wd track that continued along for the remainder of the way to Downhams Road. At one point before exiting the PWS reserve land a track turned downhill and this may well go back down to a marked entry point off Magnolia Rd and would make quite a good circuit. 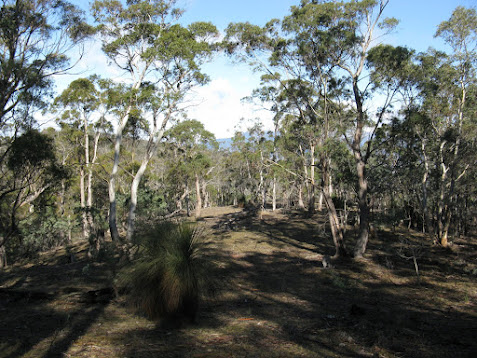 Open lead through Eucalypts
A private property sign was noted after we left the reserve, but it was only a short distance to the next bit of reserve and then the steep downhill to the road. It was amazing to see where vehicles have gone up and down and they must be desperate to get to the trees for woodhooking to bother. Closer to the road there were heaps of rubbish unfortunately. Chris had made a note about the way down but we must have missed his turn as we arrived at the road some 500 metres south of where he did and as a consequence had a steep ascent up the hill opposite.
This hill had suffered from a fire, but seedlings were plentiful and, as we believe the gums here are Eucalyptus risdonii, many looked like they may be that variety. The property through here is owned by the Flagstaff quarry lot up until a solid fence is met, which we hopped over as it was easier walking but then on the upper part of Eagle Hill we had to hop back over again. A couple more hills had to be ascended then descended before we reached Caves Hill and Rocky Tom (I had originally mistakenly thought this was part of Pilchers Hill Reserve). To get there it had been mostly open country and at one point we reached a rough 4wd which we didn’t follow for long as it started to go too low, but we did wonder if in fact it came back up because we met a track again closer the Caves.
I managed to include a geocache at Rocky Tom. It isn’t a long walk to it by the regular tracks, but this would have to be one of the longest routes taken to get to it. We had journeyed in from the Basin Hills part of the Meehan Range, a distance of 10.5k with a 700m height gain and 500m of downhill. The GPS pointed to the spot to start searching and Adrian who had been here to log it before saved me bending down to look by pulling it out from the hiding spot.
After a wander about the rock climbing venues of Shadow Buttress and Excalibur it was down to Seagers Saddle and the open grassy hilltop. I did ask Greg whether the blob in the distance was an animal or bush, but the head of a wallaby looked up to provide the answer, after which about of them began hopping away. A gentle downhill bush section brought us back to Downhams road and the back through the streets of Risdon vale to the car.
A total distance of 15.2k with a 790 metres of climbing. Total time was 6:15
A photo album is online and can be viewed by clicking the image below