Quite some time ago someone mentioned about visiting VC Falls but going there was never high on my list of walks to do. Then after thinking about places I hadn’t been to much at Mount Field and looking at the satellite view of the park, I noticed some interesting features at Lake Belton. In particular there was a valley beside it with four tarns, a long narrow isthmus as well as the outlet creek dropping sharply down to Lake Belcher. Suddenly a visit became quite an interesting idea and hence this walk.
It was pleasant weather, although a front was due late in the day with showers. Wombat Moor was quite wet as usual but the track down to the Humboldt River was in good order after recent track work by the Friends of Mount Field. Rather than follow the regular soggy ascent to Lake Belton, a route through the bush was chosen and after some 50 minutes we were at the lake shore. Although a bit of light scrub was met it is a nicer way to get to this attractive lake perched as it is up on a wide shelf. 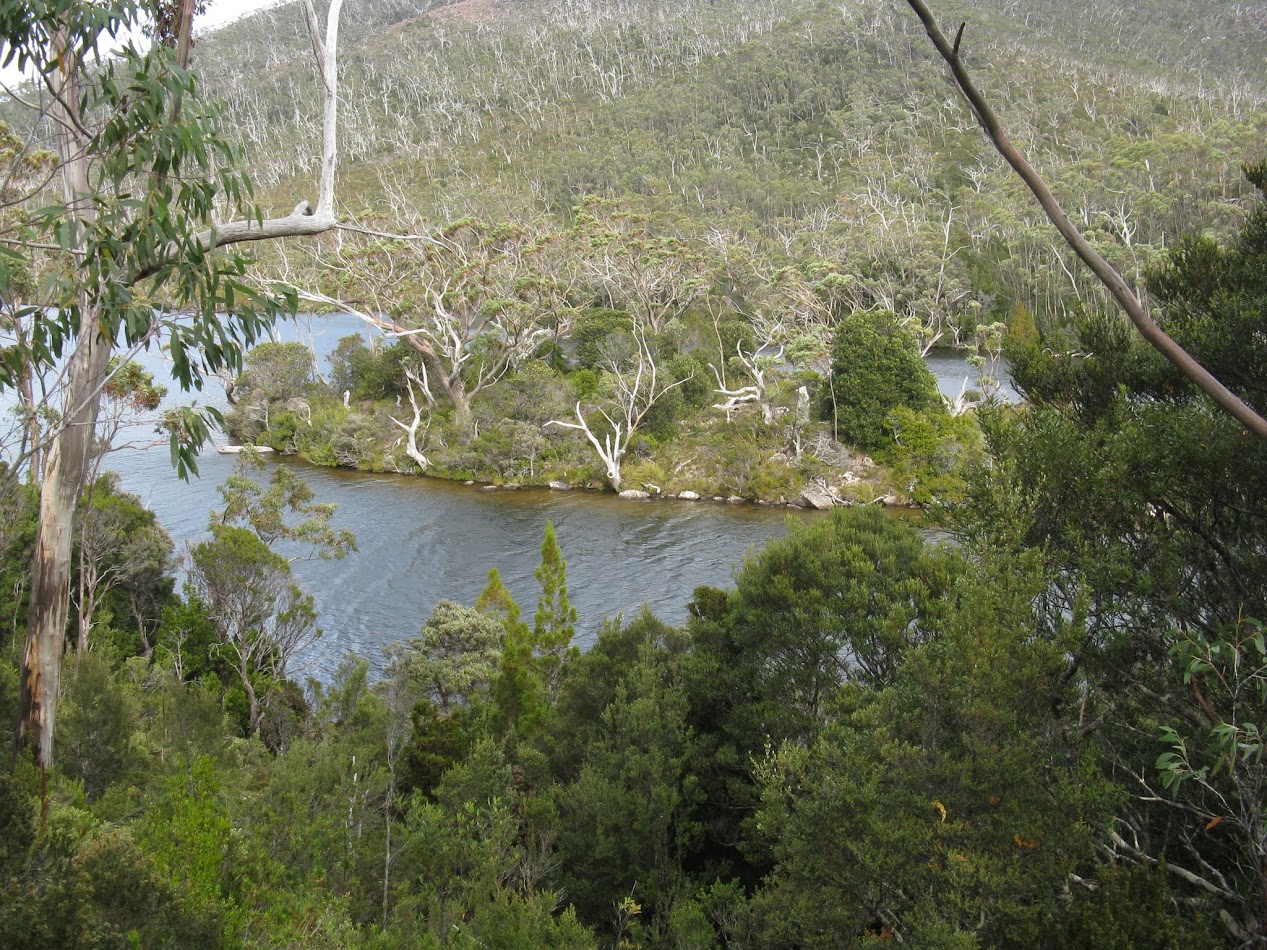 Island in Lake Belton
What came as most pleasant was the easy walking along the ridge top bedside the lake. Virtually for the whole length there were open areas that could be walked through and allowing viewpoints to the tarns, Lake Belton, down to the valley 100 metres below and to the surrounding peaks. The outlet creek was reached after 65 minutes and had pencil pines at the edge and we were also able to gain access to a good view of the narrow isthmus jutting into the lake. One particular Pencil Pine was bright with masses of fresh fruiting and the cones were very noticeable; I learnt after returning home that it was one of those rare seasons for fruiting in the highlands. 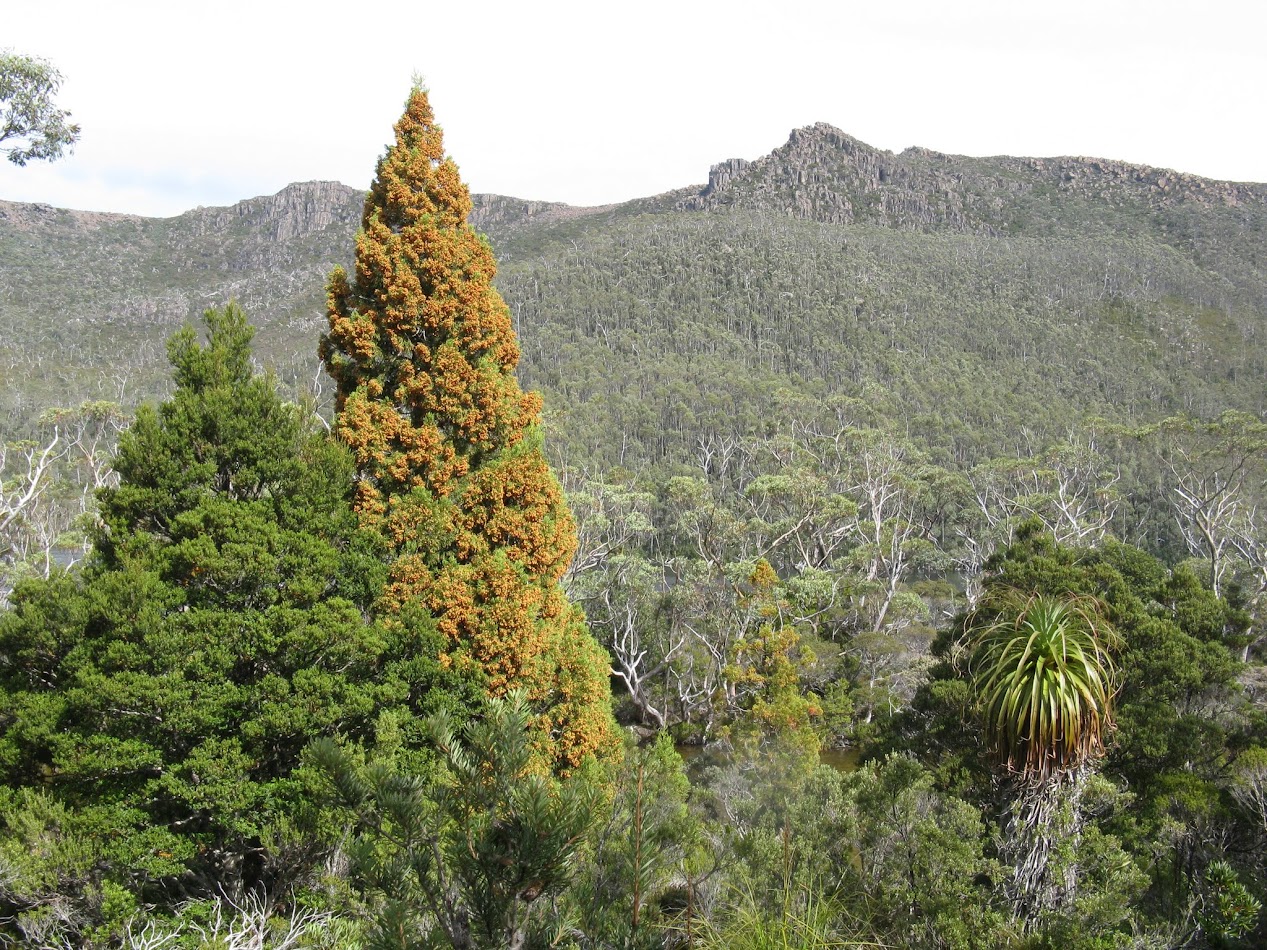 From our lunch spot it was a short walk down through the first real scrub for the day to VC Falls. There are quite a number of small drops, reportedly 10, and we managed to get to Creekside at several of these. The descent was steep and we at the shore of Lake Belcher in quick time. The lake is probably the at this point, with numerous large pines along the shore with quite an extensive forest of them visible on the opposite side of the lake.
After a brief stop at the hut we commenced the notoriously wet and muddy walk along the valley to the crossing point on the Humboldt. We have seen it worse and that made it seem less laborious, nevertheless it was good to be back on the track up to the saddle. Wombat Moor is nice country, but crossing it is not.
Since returning from the walk I discovered that place names held by the Nomenclature Board are now made available online at this site. Details on the naming of features visited are: 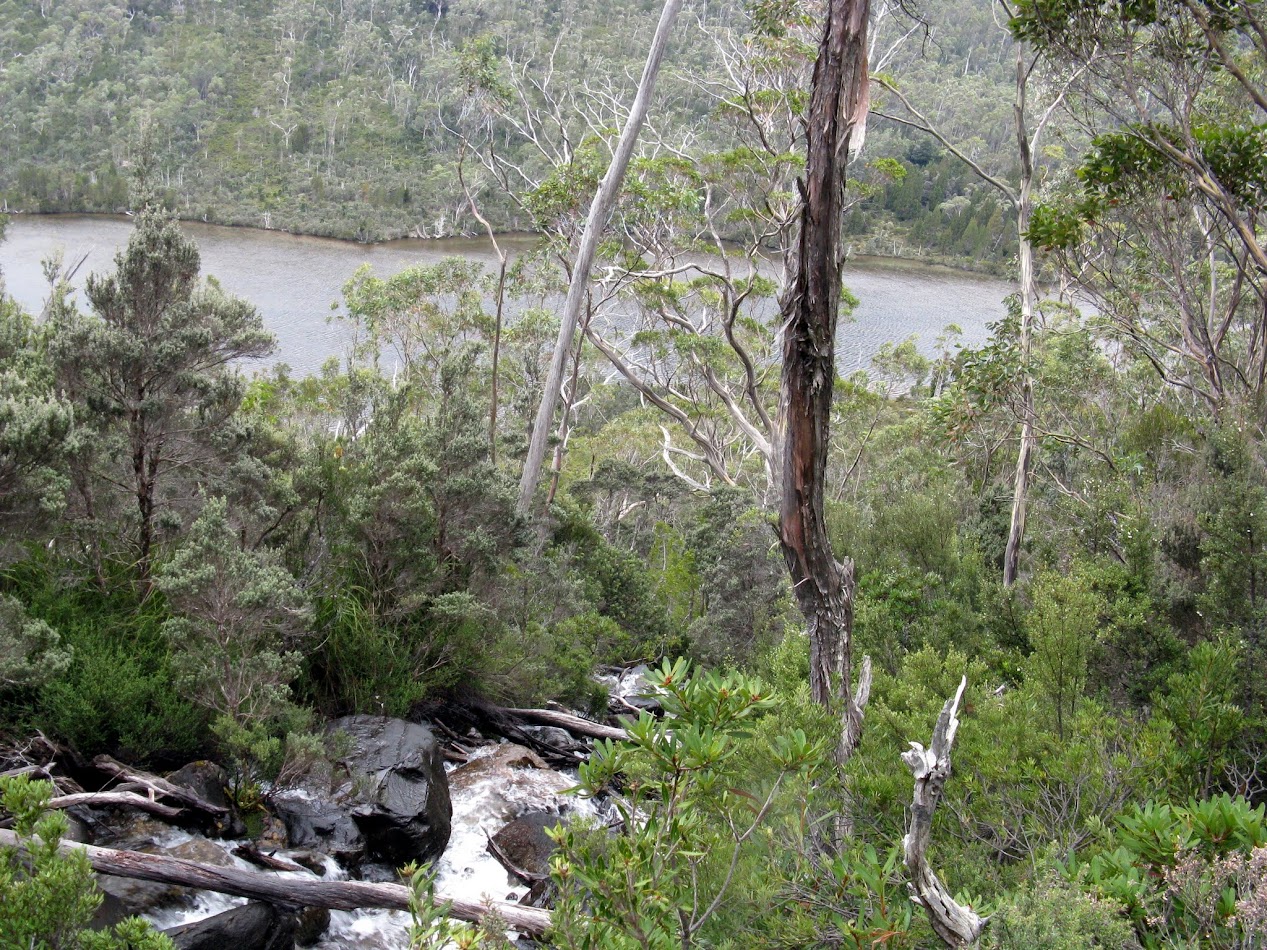 VC Falls was a little hard to discover, but eventually by just clicking the map in the region it brought up a host of names and VC Falls was one of them. It was in honour of the Tasmanian VC winners of the First World War, the number equalling the ten steps of the Falls. Some details are also in the Tasmanian Tramp Number 11 Page 42. The decision resulted from the 1952 examination of the nomenclature and there was also a proposal to rename as Statton Falls (after Sergeant Statton VC), but obviously this was not accepted.

Lake Belcher, not surprisingly was named after Bill Belcher the first Park Ranger.
And Lake Belton is recorded as a lake, 1200 yards long and averaging 250 yards wide, in the Mount Field National Park at the foot of the eastern slope of the Florentine Peak -- Tyenna Peak Ridge, about 3250 feet above sea level. Probably named after the Hon James Belton, a former Minister for Lands and Works. See Tasmanian Tramp page 41 Number 11. From J E Calders Diary it appears that he originally applied the name Lake Fenton to either this or lake Belcher.
The total time taken was  8:50 but actual walking time 7:30
Distance 14k
To view the photo album from the walk, click the image below