Wednesday 12 June 2013
In the Chauncy Vale area there is plenty of very pleasant bushland and the walk to Butlers Hill on the southern side passes through some dry Eucalypt zones with sandstone slabs. Below all this are superb cliffs with a number of caves and overhangs. 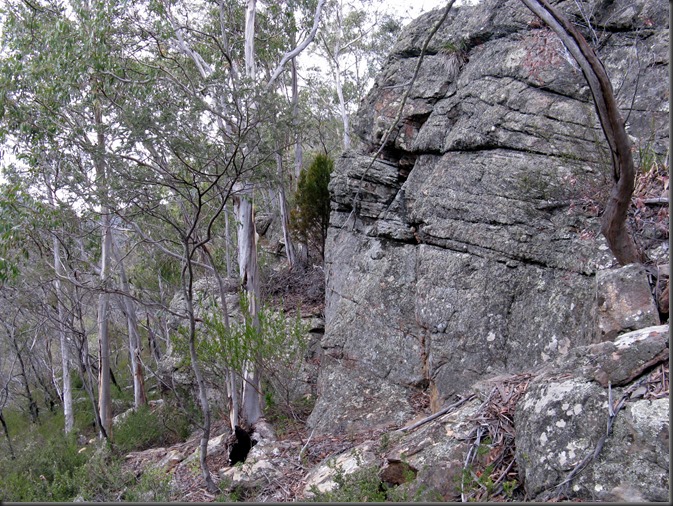 We ascended to the top of the cliffs from the Chauncy Vale car park and wound our way along the tops until an old logging track was reached. This was followed as it contoured around a hill for a while to reach a tarn, which was quite dry. A steep climb followed to another logging track which was left for a stiff climb to the top of a wooded hill. It was here we realised that this wasn’t Butlers Hill and the map and GPS were consulted. Everything pointed to Butlers being about 500 metres to the east, however in the mist all we could see was a disappearing downhill slope. Although visually it didn’t really seem right, once an upward slope was reached we felt much more comfortable that we going in the correct direction. 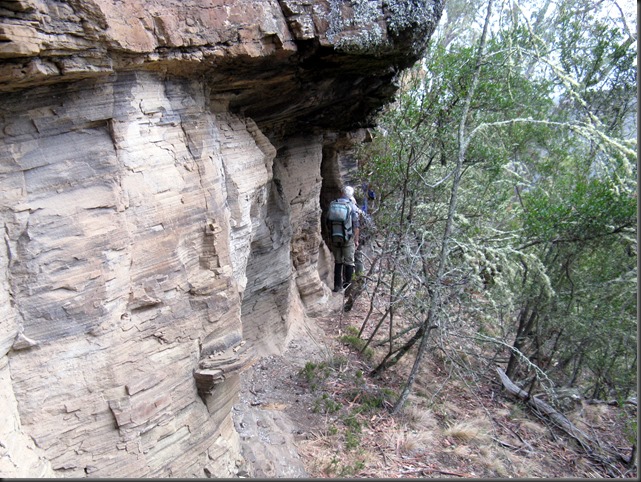 Butlers Hill had an old rock cairn constructed on top and nearby a second metal one. Trees that had been cut down to make surveying possible have been replaced by new gums, making the summit views now very limited. It was 12:15 PM and we had been walking since 9:15 AM and so this seemed the obvious place for lunch.
Some old rock cairns were noticed and we followed these for a short distance then realised that they didn’t really take us on a better route back. After consulting the map on GPS it didn’t take long to cross our inward path in the saddle between the hills, but rather than retrace our steps we on down to join the old logging track. We had been following orange tapes for part of the distance and they also led in the same direction. Once at the old logging track we noticed copious orange tapes; so someone, who we reckoned might have been a walking party, was keen to make the turnoff very obvious. 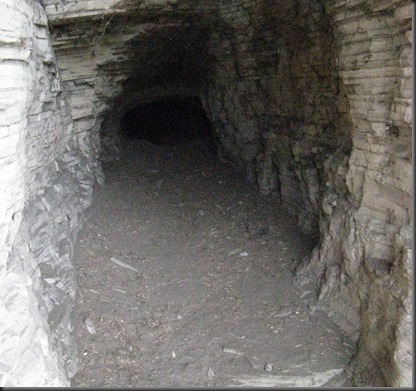 During the return we came down at a gully and were able to walk under the upper cliffs for a considerable distance. This was quite fascinating with many overhangs and caves, masses of what we thought were Devil scats and several spots with the white from bird droppings from the cliffs above. I was keen to collect a geocache but as we got closer to the location the GPS indicated it was directly below us so this necessitated continuing along on the level we were on until a way could be found to get onto the walking track past the cache cave.
In all it was almost 13k walk and took 6¾ hours. The inward route was 3 hours and 5.75k whilst the return was 7k and 3¾ hours.

Route taken
There is also a map at EveryTrail which if you zoom in, using the satellite or hybrid option,  the ledges along the cliffs where we walked can clearly be seen.
bushwalk bushwalking caves cliffs forest hill nature outdoors rock formations Tasmania