14 – 17 April 2013
After returning from our aborted trip in February by the much quicker Guelph Basin lakeside route, Dave and I decided we could get to King William 11 after all. This time Nigel joined us and good time was made to our previous turnaround spot. The GPS was invaluable in getting from the road to the Guelph River and then through more bush to the lake shore, with just one short, but slow to cross, buttongrass plain. 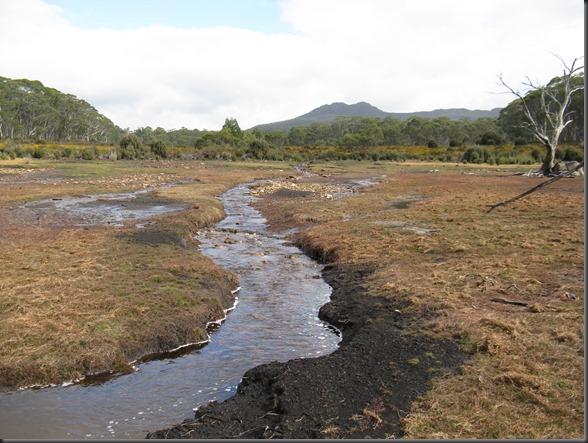 However after making fairly good time west from the end of the lake we started to get into a bit of scrub and whilst having lunch, debated whether it would better to head directly up to Slatters Peak or continue up the valley to the planned ridge ascent. Our hoped for campsite was the same distance as just to the base of ridge further west, so on the basis of distance we took the plunge into the slopes above us. It proved to be quite a scrubby climb right up to the upper ramparts of Slatters, often having to be force our way through bushes. At one stage it seemed we would get to camp in comfortable time but when eventually we could get a decent view up ahead it gradually dawned on us that it was going to take nearly all the daylight to reach our destination. Once over the peak it was quite a shock to view that the route ahead was not the easy walk down what was remembered as a simple slope. Instead there was a rocky descent followed by a narrow rocky crest to another minor peak then down to the plateau. 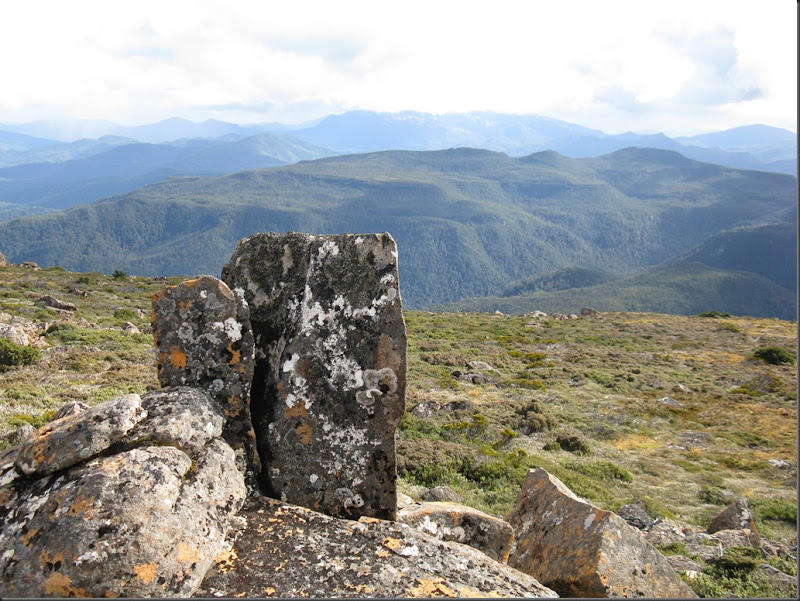 I had suggested to Nigel that I go on to find a camp, before I discovered how much slower the 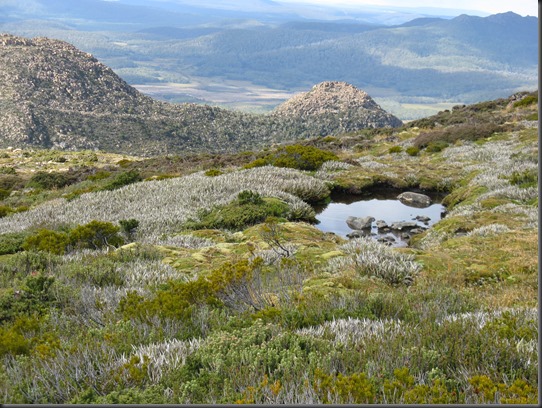 descent was going to be, and only made it to the plateau and a good camping spot by about 5:30. I had passed a decent size pool and after setting up decided it would be wise to mark the spot on the GPS in case I had trouble getting back from the water trip in the dulling light. A few blows on the whistle didn’t get a response and after a while I decided that Dave and Nigel must have made camp higher up.
Next morning I heard voices from an unexpected direction and soon spotted Dave and Nigel heading my way. They had seen a tarn and made a direct line to it and fortunately managed to miss a big patch of Fagus, arriving at a campsite in the very last bit of light. We spent the day walking to King William 11 experiencing mostly fine weather, with some mist and a luckily sun when on top, plus a shower as we neared camp on the way back.
The sky cleared early in the evening and the morning brought heavy frost, frozen socks and stiff boots, but the sun which arrived at precisely 7:42am soon thawed everything and dried the tent. Our way out was by the considerably e 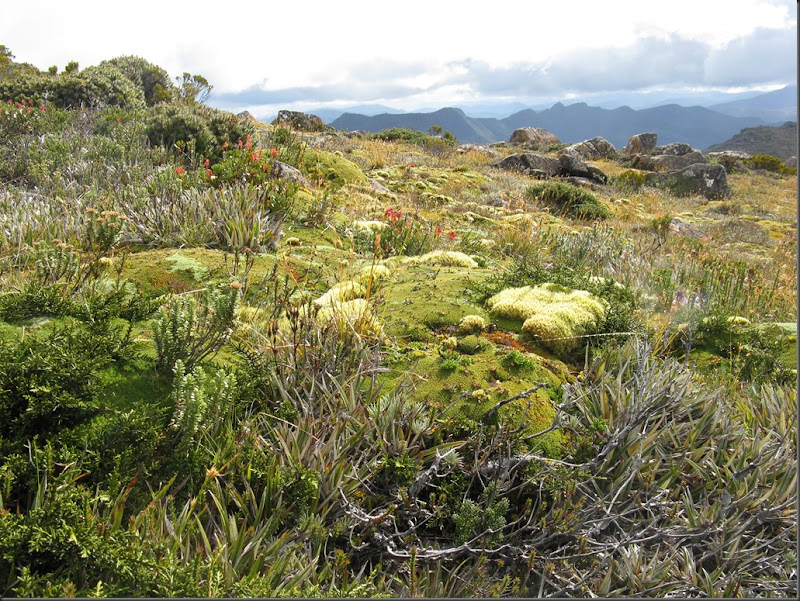 asier route off the northwestern corner of the plateau. It was not difficult to avoid any 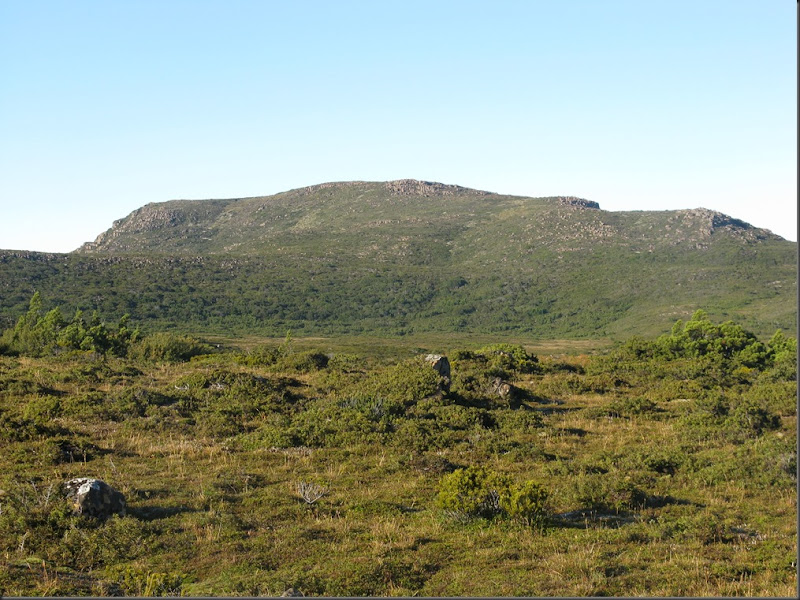 scrub although there was plentiful Bauera to walk through. Half way down open shaded forest prevailed making progress easy. 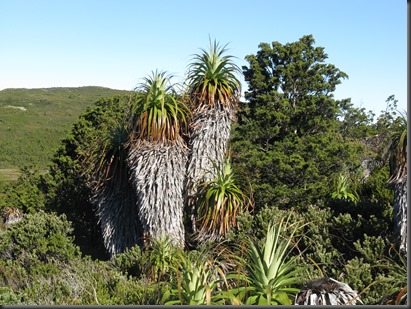 The plain at the bottom, however, had plenty of wet areas and we all fell into water filled holes whilst traversing it. At one creek crossing Nigel waded across only to find he couldn’t get up the bank and, with his boots sinking into soft mud, he gradually had water close to waist level. He struggled back to where we were watching his plight unable to give much assistance. Beyond here the plain became easier and the banks of the creek gave good walking conditions. A few crossings were made to get to the best banks and fortunately plenty of rocks allowed these to be dry affairs. 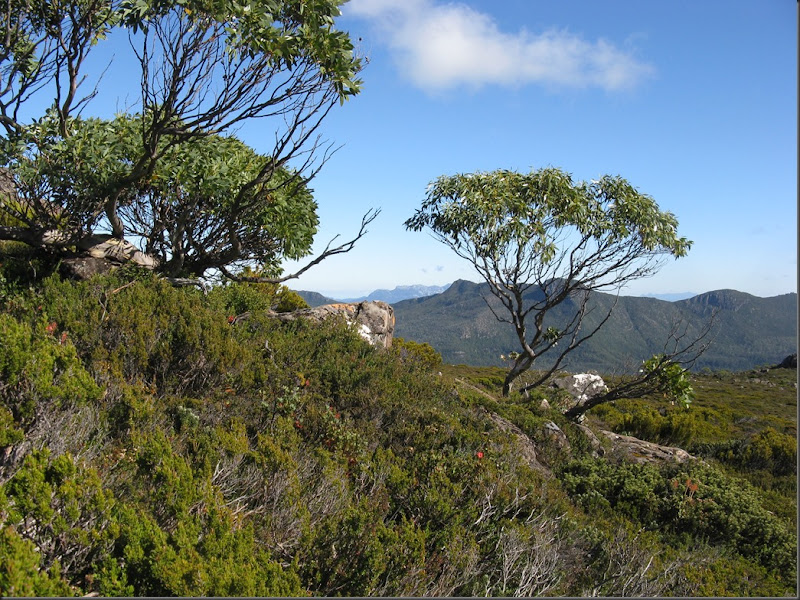 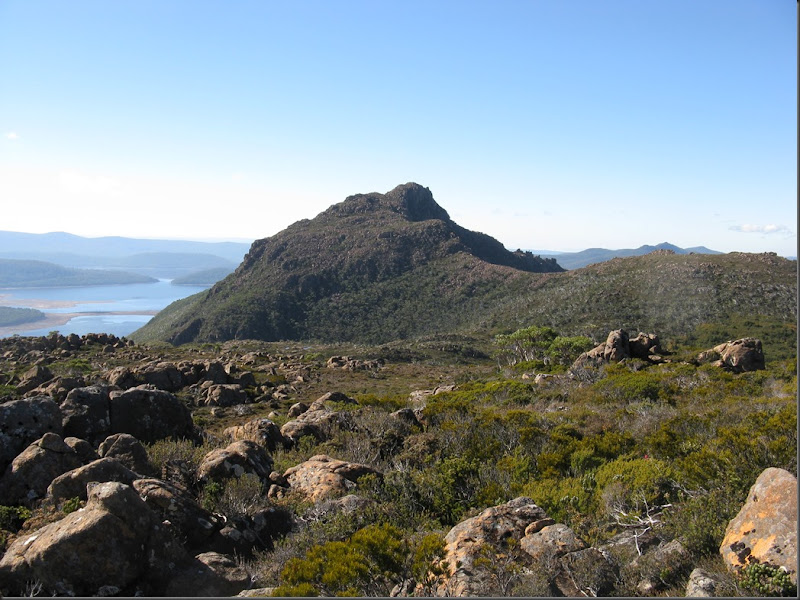 With insufficient time to walk out in the day, camp was set up on the shore once Guelph Basin was reached. The overnight frost was not as severe and socks and boots were not frozen, which was just as well because morning fog impeded the warmth from the sun. It was just a matter of retracing our inward steps and we arrived back at the car with the next stop lunch at the Wombat Café at Derwent Bridge.