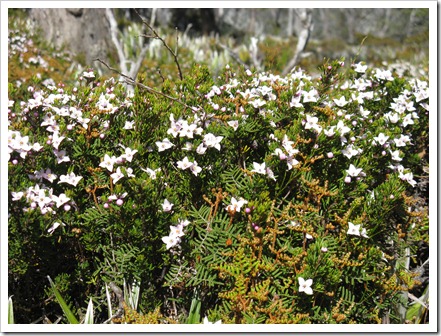 We had luck with the weather but not with the Richea.   There was a shower or two expected by about midday, but it remained mostly sunny until some cloud gradually increased as expected but there was no sign of any showers whilst we were in the area.  It seems that it was a poor flowering year for Richea scoparia as there was not much out at all.  Other plants, such as Boronia and Epacris were quite prolific and looked splendid on the moorland and there were several Waratah bushes in flower.  Nevertheless it was a pleasant walk in the high country.
Click to visit the photo album