3 – 5 October 2012
Although it was fine weather for the three days we did get quite a bit of wind starting late the first night and continuing during the day; but certainly nowhere like the ferocious winds that hit the south of the state.
As expected the lagoons behind Hazards Beach were high so we had to walk the beach. A group of kayakers was at the Lagunta Creek end as we passed through on the way to Cooks. The flowers were at their peak between the two beaches and again on the track to Bryans Beach.

At the end of Bryans Graham spotted a suspicious spot and much to our surprise found it contained a geocache. A bit of scrub was met on the way to Passage Beach and plenty of knee high stuff from the other end on the way to the southern peaks of the peninsula overlooking Cape Geographe. The way back was easier although the route taken was longer. 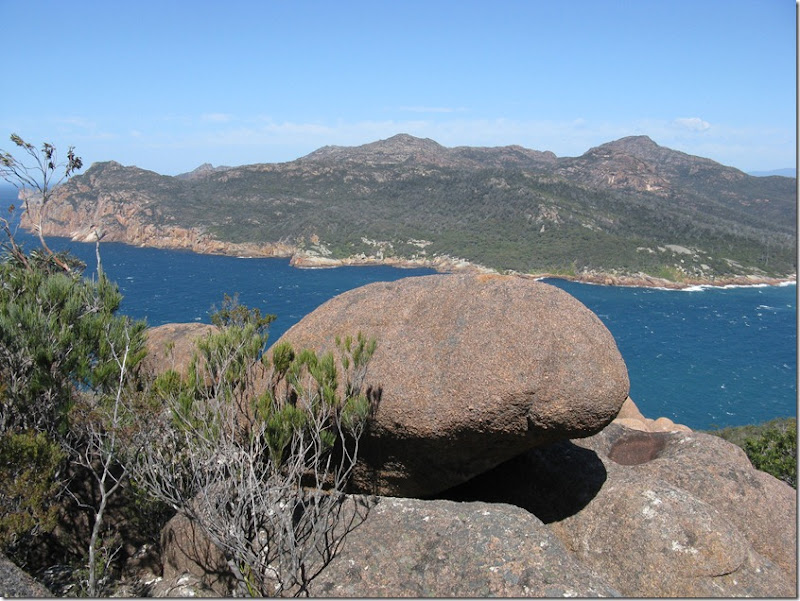 Graham left early on the final day and walked out via Mount Graham and met back up with us at Wineglass Beach. On our way out we discovered the kayakers still at Lagunta, and having had to abandon plans due to the rough sea, were preparing to walk out carry all their gear. A big tree was down on the Isthmus Track and we picked the wrong side to get passed as we ended in a thicket.
We did collect a few geocaches during trip and the report on these is online.