21 – 23 February 2012
The track has got a bit worse for wear since the last visit, although some bits had not changed that much it did seem that the alpine area had become somewhat more degraded, The ascent to the plateau below Mount Sarah Jane was hard and persistent and entailed some 640 metres of up over a distance of 1.7 k, with the last part of 250 metres over a distance of 500 metres quite steep (1:2). Little wonder we were tired by the time camp was reached.
Although at the start of the day the cloud was low it gradually lifted and cleared away to be very pleasant by day's end. On top of that there were no mosquitoes or flies and other pesky insects and that remained the situation for the whole trip.
Misty cloud persisted for the start of the middle day and obscured views of Angel Falls, although the swirling of it did make it very atmospheric at the cliff edge. Conditions gradually cleared and made for a very pleasant walk to the Lonely Tarns area of Judds Charm and Lake Picone. From there we worked our way up to the ridge leading to Lots Wife where the climbing gully was eventually located for getting to the top.

No one stayed up too late that night, although Greg continued to do a bit of track hardening. What we did not expect was the extreme winds that started about 10 pm and buffeted the tents all night, culminating in particularly severe winds just before dawn. It is amazing what the tents will withstand as they lay flat then seemed to fill with air and looked like they would blow apart. The pole did come out of the eyelet on Jon's tent and struck a hole through the fabric. Greg and Jon witnessed water blowing up from the nearby tarn several metres in height. And while packing I lost the grip on a plastic bag as it took off shooting up to the top of Mount Sarah Jane then circled around the cliffs before dropping to the ground a few hundred metres from take off point. Walking out was at times challenging and even Dave got blown over. Fortunately we soon escaped the worst of the wind once we had descended the initial 200 metres off the plateau into the more sheltered shrub zone. 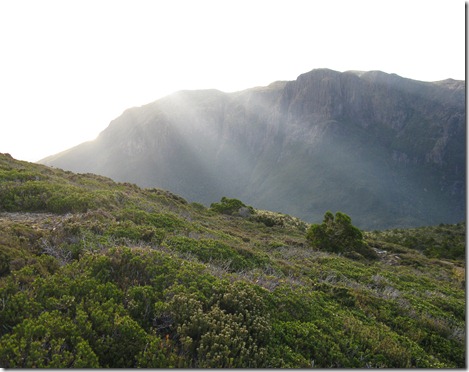 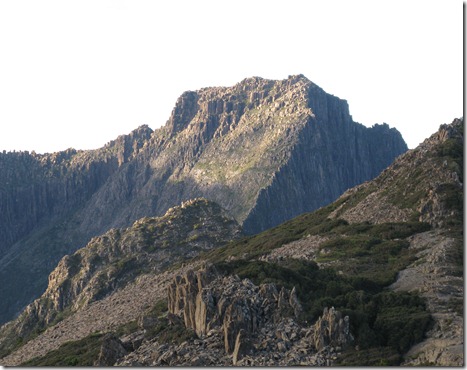 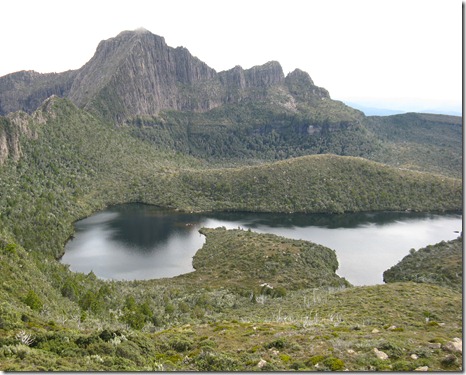 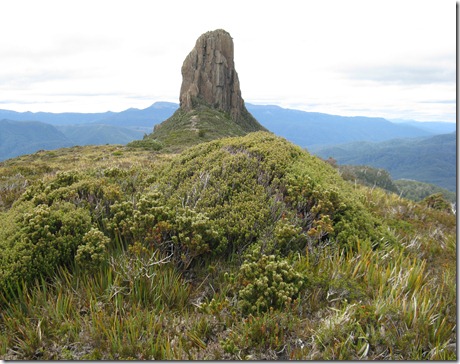 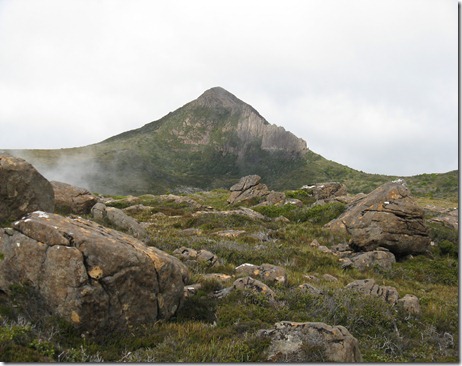