17-20 October 2011
Back in 1991 Dave Tucker took a 3 day walk from the Gould Plateau, over the top of Mount Gould and to The Guardians and out via The Labyrinth. I thought I would like to do this walk again and that was the plan when we set off from Hobart on 17th October. The previous day had been pretty cold and wet in Hobart, but as predicted by the bureau all was fine on the Monday; however the site of Mount Wellington covered quite low down in snow that morning was somewhat disconcerting. This was further added to with the view of the snow clad peaks and hills of Mount Field then the site of snow beside the road on the approach to Derwent Bridge. Plan B was hatched when Mounts Olympus and Rufus came into view. 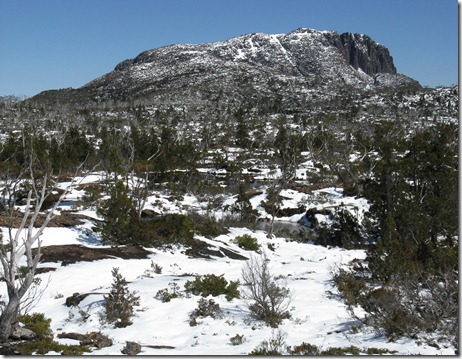 Walled Mountain
We were on the only ferry for the day, soon after 1PM, and walked into Pine Valley to a campsite about 20 minutes upstream from the hut. During the walk from Narcissus we thought the warm sun would melt a lot of snow fairly quickly and there was some evidence of this happening. Nevertheless the walk next morning to The Labyrinth was through plenty of snow and it was nice to be the first to people to make our impression on it and not be following others footsteps. The two of us, Greg Kidd and me, turned off from the track at the bottom of the descent from The Parthenon, crossed the Cyane Lake outlet creek, climbed the hill above and trudged over to set up camp near Lake Eurynome. We cleared the snow away, put the tent up, had lunch and then climbed Walled Mountain where a very impressive and dangerous looking cornice shed the odd bit of snow every now and then down a huge drop. We were easily able to retrace our footsteps back down, but as we moved out to the sunnier areas the snow had diminished considerably. On arrival at camp the snow had nearly all melted, leaving the tent surrounded by pools of water. 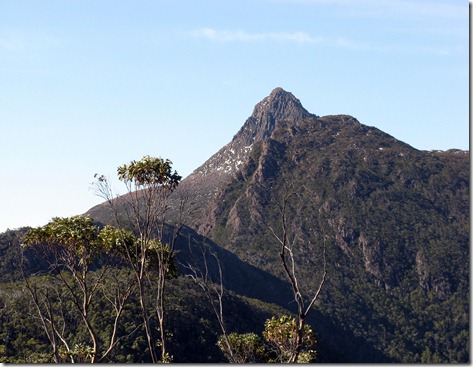 Mount Gould
Day three was delightful, again with a cloudless sky and hardly any breeze. The face of Mount Gould that we could see was now free of any white patches and we were soon at the base of The Minotaur. There was a pad all the way up this rather steep mountain side; I knew it was steep just from looking as well as my recollection, but I had no memory of a pad being there in 91. Once on top, Gould looked just as steep as did from The Labyrinth, which was enough to convince us to take the easier way around the side slopes. This was free of rocks and on arriving at a little perched plateau lunch was had followed by a very steep climb to the top of Mount Gould. It is not a peak for the fainthearted but once back to the packs was when the first serious impediments arose.
My memory was lots of scrub, particularly scoparia low down and some notes suggested sidling. However at what level to sidle? It was a bit of a climb to reach the cliff line so I made the decision to proceed at the level we were at. This entailed a bit of scrub, but then some lines of Fagus forced a more circuitous route until we dropped down lower to see if the going was better there. It wasn’t . So a way had had to be forced through a bit of pointy scrub until the open part of Gould Plateau was reached. The day finished well though, with camp at a scenic spot on the plateau. 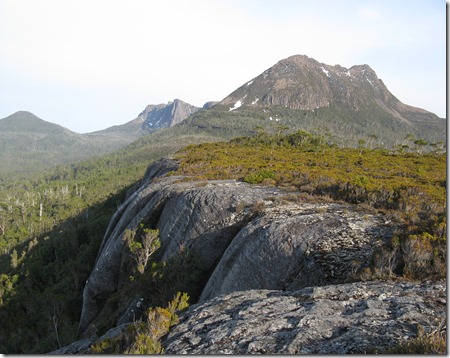 Mount Gould
An early start saw as the bottom in nice old forest, although a muddy section in the middle of the descent had to be negotiated. Now the area doesn’t seem to get as many visitors as in days of yore and on exiting the forest a pad was followed that continued over a floodplain. Then it ended at a barrier of Teatree and bottlebrush. After a bit of searching including on the close by river bank, we gave up looking and went back to the forest where a red arrow, that had not been noticed, pointed sharply right. Close on half an hour was lost by all this and when we eventually walked along the near the river my GPS indicated that we had got to within about 30 metres of the track, if only we had known.
Once I could walk the lakeside track beside Lake St Clair in something less than the signed hours, but nowadays I need the whole 5 hours to get to the visitor centre. It has always seemed a tiring walk and this was no exception; no wonder I am usually happy to catch the ferry.
The bureau forecast fine weather for 3 ½ days and they were spot on. Just before reaching Cynthia Bay the increasing high cloud let out a few spots and soon after starting the drive home close to 5 PM it began to rain.